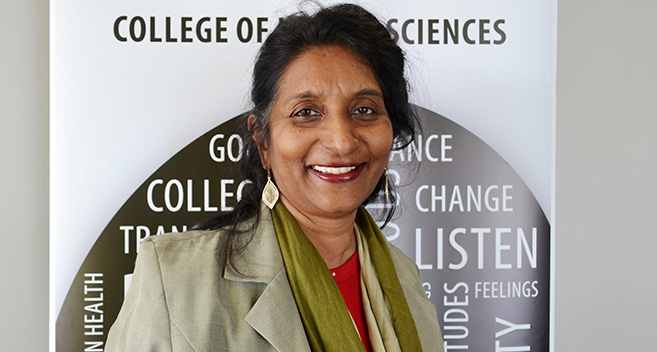 Senior Lecturer and Academic Leader of the Discipline of Pharmaceutical Sciences at UKZN, Dr Panjasaram Naidoo, has been appointed by the Minister of Health to serve a second five-year term on the South African Pharmacy Council, the statutory body for pharmacists and pharmacy support personnel.

Naidoo is the Chairperson of the Continuing Professional Development (CPD) Committee on the Council and serves on the Executive, Education and Health Committees.

Naidoo is also currently on a Ministerial appointment as a member of the Scheduling and Naming Committee of the Medicines Control Council and has served on the Appeals Committee of the National Department of Health.

She holds membership on the International AIDS Society, HIV Clinicians Society, Society of Clinical Pharmacy and is a Fellow of the Pharmaceutical Society of South Africa. Naidoo serves on the Humanities Social Science Research Ethics Committee.

She recently attended the Life Long Learning Conference in Orlando in the United States as the Chair of the CPD committee and was invited to serve on the International Expert Panel debating the issue: “Is CPD a Fad”, in the company of other professionals from the United States, Britain, Australia and Canada.

Naidoo has represented the Pharmacy profession in giving input to the South African Parliament, the national and provincial Departments of Health as well as local health structures of KwaZulu-Natal, including many medical aid associations in the early 1990s.

Naidoo was also invited to give a talk at the Pharmacy Department of the University of Sydney in Australia in July this year. Her topic was: “Evidence Based Teaching and Learning informed by Practice, Community Engagement and Research”.

Naidoo’s Research interests include HIV and AIDS with emphasis on the role of schistosomiasis, Indigenous Knowledge Systems on HIV and AIDS, and the National Health Insurance (NHI).

Naidoo supervises masters and PhD students in these areas and has publications in many SAPSE /ISI rated journals.

Naidoo is involved in community work both formally and informally and lectures on the outreach programme of the School of Nursing and Public Health.