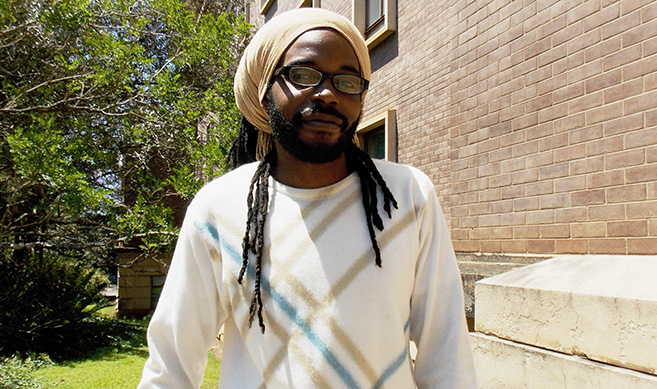 A PhD student in the Discipline of Dietetics and Human Nutrition has had two peer-reviewed papers based on his research published in recognised journals.

Originally from Trinidad in the Caribbean, Mr Keiron Audain, who completed his first Master’s degree in Molecular Biology and Pathology of Viruses at the Imperial College in London, began his second Master’s degree in Medical Biochemistry at UKZN’s Durban campus in 2010 and then decided to follow it up with a PhD in Human Nutrition.

Audain investigated and compared the nutritional status and food choices of adolescents from a high-income (Grace College) and a low-income school (S’bongumusa High School) in the Hilton area.

‘Prior to arriving at UKZN my academic background was largely Biomedical, however I soon became more aware of the importance of Human Nutrition in positive health outcomes,’ said Audain of his decision to pursue a PhD in the Discipline.

‘I was keen to investigate the role of nutrition in alleviating some of the major health concerns affecting Africa and the developing world, namely chronic and infectious diseases and malnutrition.’

What Audain found most interesting in his study was that poor nutrition overall was observed in adolescents at both schools. He found obesity was more prevalent among male learners from the high income school and among female scholars in the low-income school. The causes of the obesity in the two groups were different however, with the high-income students reportedly eating more fatty red meat and the lower-income students consuming more fatty snacks, such as vetkoek and samoosas.

The subjects’ choice of food contributing to obesity reflected their contrasting socio-economic backgrounds, however, poor habits were observed in both groups.

Audain also recorded that stunted growth was apparent in the low-income learners, indicating a double-burden of obesity and stunting which, literature suggests, can play a role in increased disease risk in adulthood.

Additionally, Audain was able to present his research in the form of a poster presentation at the African Nutrition and Epidemiology Conference (ANEC) in July as well as at the National Nutrition Congress held in Johannesburg last month.

The interest in Audain’s work sheds light on the growing concern around adolescent obesity and overall health and provides a sound perspective on the socio-economic factors and eating habits behind these issues. Having experienced the negative impact on his current health because of his poor eating habits as an adolescent, Audain hopes that studies similar to his can illuminate the crucial issue of adolescent nutrition and contribute to the introduction of a nutrition intervention strategy.

Audain, who wants to continue with research once he has obtained his PhD, hopes his qualification will put him in a position to carry out projects that further investigate the association between nutrition and disease risk.

‘I am also keen to collaborate with local NGOs and community workers and other researchers in the field to develop and implement sustainable nutrition strategies to improve health.’

His time at UKZN has provided Audain with a beneficial, multidisciplinary outlook on his work, having been a part of both the Medical Biochemistry and Dietetics and Human Nutrition Disciplines at the University.

‘I think the close proximity and interaction between the Human Nutrition and Food Security departments here at the School of Agricultural, Earth and Environmental Sciences (SAEES) is a great thing, as these two research areas are inextricably linked,’ said Audain.

UKZN’s input into its postgraduate students is another area Audain appreciated during his studies, saying: ‘I like the fact that UKZN invests in the academic development of its postgraduates by engaging in things such as sponsoring writing workshops, which can only strengthen its research position and capabilities.’

Audain credited Professor Anil Chuturgoon of UKZN’s Discipline of Medical Biochemistry for helping him to come to South Africa and embark on this research journey.

Audain also thanked his colleague and friend Dr Francis Zotor at the University of Health and Allied Sciences for his mentorship, academically and personally, while acknowledging the influence of Dr Paul Amuna at the University of Greenwich for inspiring him as an African academic championing nutrition and health issues on a global stage.

Audain’s former supervisor at the Imperial College in London, Dr Simon Jeffs, also played a role in supporting Audain in his work over the years.

He expressed heartfelt gratitude for the support of his mother, friends and family both in his home country and in South Africa.

In the Discipline of Dietetics and Human Nutrition, Audain’s supervisors, Professor Frederick Veldman and Mrs Suna Kaisser, were “infectiously passionate” about his project and assisted ‘every step of the way’.

Kassier said the study provided a snapshot of the nutritional status of future South African adults as weight status was known to track into adulthood. This, she said, would form an indicator of adult onset lifestyle diseases, such as diabetes and high blood pressure, which are linked to body mass index (BMI).

Audain’s revelations of the complicated relationship between obesity and socio-economic factors could also provide important insight into the discussion around obesity in South Africa.