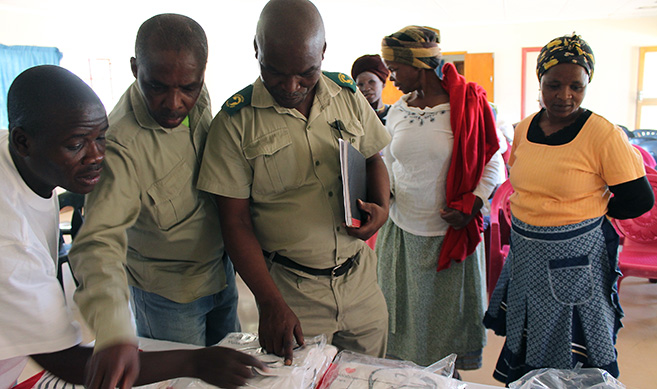 A PhD candidate in Zoology in UKZN’s School of Life Sciences, Ms Morgan Pfeiffer, hosted a Vulture Day at Collywobbles in the Eastern Cape, where she presented results of some of the research she has been undertaking on the vulnerable Cape Vulture in the region.

The day was planned to coincide with International Vulture Day and Pfeiffer invited various key role-players in the conservation of vultures in the area to attend the event, aimed at informing the community of the work she has been doing as well as to raise awareness around the plight of the birds which face being listed as endangered worldwide.

The Cape Vulture was up-listed to endangered this year in South Africa, Lesotho, and Swaziland, but is still listed as vulnerable on the International scale (International Conservation of Natures).

International Vulture Day in South Africa is spearheaded by Vulpro and the Endangered Wildlife Trust (EWT).

The information day at Collywobbles attracted about 100 people, including members and the Chair of the Eastern Cape Bird Club, the Department of Environmental Affairs and Tourism (DEAT), the Idutywa Tourism Office, Ward Councillors, ANC officials, traditional leaders and elders of the community at Idutywa.

Mr Nick Theron of Birdlife South Africa delivered a presentation about the vultures.

The event was funded in part by Eskom, which provided T-shirts for the day and sponsored the cost of the hall.

Pfeiffer, who has been working in the area since 2012, presented her research with the aid of a translator and maintained the standard of a scientific presentation, which was appreciated by the audience, who showed understanding of her work in their community.

Pfeiffer said she received a good response from the guests, who had many questions following her presentation, especially around tourism, since they have realised that the birds present an opportunity to increase conservation tourism in the region.

Collywobbles boasts the biggest breeding population of Cape Vultures in the southern node, made up of the Eastern Cape and KwaZulu-Natal, with 200 pairs of the raptors living in the area. The raptors face numerous threats to their survival, including accidental poisoning by commercial farmers, an increase in poaching (poachers poison carcasses to avoid the chance that vultures would signal to the rangers that an animal has been killed) and being killed for traditional medicinal uses.

In response to these threats and with the aim of ensuring that the population in the Collywobbles area is protected, Pfeiffer suggested that the employment of a local person to be the champion of the colony would be beneficial, provided funding was available. The incumbent would be able to count the vultures regularly and promote their protection within the largely rural community.

Pfeiffer, who is from the United States and completed her BSc in Wildlife and Fisheries Science at Pennsylvania State University, is being supervised by UKZN’s Professor Colleen Downs and co-supervised by Mr Jan Venter of the Eastern Cape Parks and Tourism Agency (ECPTA), who works in the lobbying of local government on the issue of the placement of wind turbines in the province, which present an additional threat to birds such as vultures.