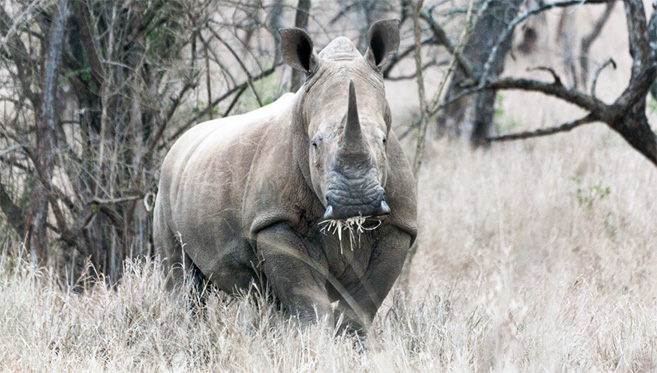 The extinction in the wild of the southern white rhino population could be prevented by allowing local communities to harvest horns in a controlled manner and sell them in a legal trading arrangement.

This is according to university researchers including UKZN honorary Research Fellow, Professor Enrico Di Minnin, who points out that rhino horn is made of the same material as human hair and fingernails and grows back in two or three years.

More than 1 000 rhinos were killed for their horns in South Africa last year, mainly to supply a huge demand in Asia where they are used for traditional Chinese medicine and personal prestige.

A new study based on ecological and socio-economic models has found that the white rhino population in South Africa could become extinct in the wild in less than 20 years unless anti-poaching efforts and monetary fines are increased to levels that would deter poachers. The study suggests funding for this could be generated by legal trade in rhino horn which has been banned since 1977.

‘Our results suggest that enhancing rhino protection to levels that will discourage poaching will require raising tens of millions of dollars year after year just for rhino conservation when endless other uses for conservation resources exist,’ said Di Minin, who is also a Research Fellow at the University of Helsinki in Finland.

‘The funding generated from a legal trade in rhino horn could be used to cover protection costs of rhino and other biodiversity and to generate sustainable income for poor local communities,’ said Di Minin.

Professor Atte Moilanen of the University of Helsinki, who was also involved in the research, said: ‘Rhino horn could be harvested from animals that die of natural causes and could also be taken from live animals with minimum risk as the horn is compressed hair, and grows back.’

However, the authors of this study, including conservation scientists and practitioners in South Africa, Finland and the United Kingdom, warn on potential pitfalls.

Said UKZN’s Professor Rob Slotow: ‘Policy-makers in South Africa should be wary of supporting the  lifting of the ban on trade in rhino horn products unless funding generated from the trade is re-invested in improved rhino protection.’

‘An important contribution legal trade could make would be to cover enhanced protection costs, at least in the short term, until other measures over some longer period lead to a reduction in demand from users in the Far East,’ added Di Minin.