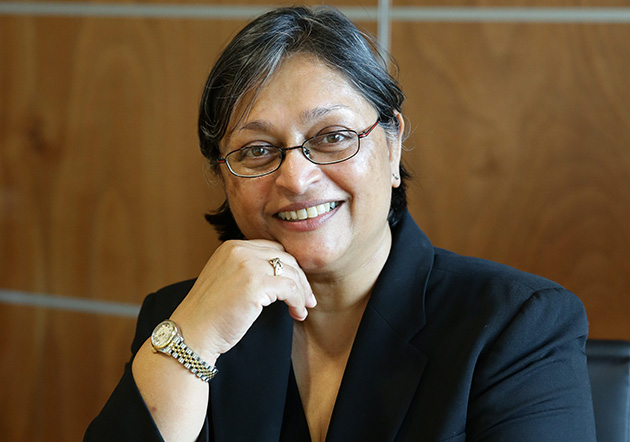 Distinguished academic and renowned HIV researcher, Professor Quarraisha Abdool Karim has been awarded the 2014 TWAS-Lenovo Science Prize - the most prestigious annual prize of The World Academy of Sciences (TWAS), based in Trieste Italy. Professor Abdool Karim, Associate Director of the Centre for the AIDS Programme of Research in South Africa (CAPRISA) and Professor of Epidemiology at Columbia University in New York, has been recognised for her ground-breaking research on HIV prevention in women.

The prize, which comprises a citation, medal and US$100 000 was announced by Professor Chunli Bai, President of TWAS, on Sunday 26 October 2014 at a Prize Ceremony of the Annual TWAS Conference in Muscat, Sultanate of Oman.

Professor Abdool Karim said she is humbled by the award.  ‘I feel very privileged and honoured to be the recipient of this award. AIDS is a major global challenge and in Africa, young women have the highest rates of HIV infection,’ she said. ‘By preventing HIV infection in women,’ said Professor Abdool Karim, ‘we have a chance to alter the course of the epidemic and save many millions of lives.’

‘We have a great admiration and respect for the work of Dr Karim,’ said TWAS President Bai Chunli. ‘She has an exemplary record of high-impact science, and there is a deep humanity to her work. Just as important, she has helped to train hundreds of young African scientists who are expanding the research into HIV and tuberculosis. She really is a model scientist, and a tremendous inspiration to colleagues across the world.’

This international award follows on two other medals that Professor Abdool Karim received in October 2014 in her home country South Africa. On 14 October, she received the “Science-for-Society Gold Medal” for 2014 from the Academy of Science for South Africa (ASSAf). In conferring this award, Professor Daya Reddy, President of ASSAf commended her ‘profound impact on HIV prevention, advocacy and leadership’.

The third Gold Medal that Abdool Karim receives this month will be at the Annual Awards Dinner of the South African Medical Research Council (MRC) on 30 October, where she will be receiving the MRC’s Gold Medal Scientific Achievement Award.  ‘The Medical Research Council recognises and congratulates you as an outstanding South African scientist,’ said MRC Chairperson, Professor Mike Sathekge, ‘for your contributions to raising the profile and impact of science in South Africa.’

In addition to the medal awards, Professor Abdool Karim was elected as a Foreign Associate Member of the prestigious Institute of Medicine (IOM) of the US National Academies of Science. In making this announcement on 20 October 2014, the President of the IOM, Dr Victor J. Dzau commented that, ‘These leaders’ tremendous achievements have contributed significantly to advancing health and medicine.’

These awards recognise 25 years of research on HIV and AIDS by Professor Abdool Karim. She started her HIV research in 1989 with one of the first HIV community-based surveys in Africa.  Her early studies showed that young women had a disproportionately higher risk of HIV infection – a finding that defined the rest of her research. Since then, she has devoted all her research to finding solutions to help women protect themselves from HIV infection. Several initial attempts with films and gels were not successful. However, the breakthrough came more than twenty years later in 2010, when she announced the results of the CAPRISA 004 trial at the International AIDS Conference in Vienna. Flanked on the Vienna Conference podium by Minister of Health, Dr Aaron Motsoaledi and KwaZulu-Natal Premier, Dr Zweli Mkhize, she detailed the finding that tenofovir gel reduced the risk of both HIV infection and genital herpes in women.

The tenofovir gel results were heralded as one of the Top 10 scientific breakthroughs of 2010 by the journal Science and has been cited by other scientists over 1 000 times in the last three years. It was also among the top two articles for The Lancet’s “Paper of the Year” in 2010.  ‘Tenofovir gel could fill an important HIV prevention gap by empowering women who are unable to successfully negotiate mutual faithfulness or condom use with their male partners,’ said Abdool Karim. A confirmatory study, which is required for the gel to be licenced as a medicine, is currently underway by the Follow-on African Consortium for Tenofovir Studies (FACTS), led by Professors Helen Rees and Glenda Gray.

When licensed, widespread use of tenofovir gel could prevent over half a million new HIV infections in South Africa alone over the next decade. Professor Abdool Karim’s research on HIV and AIDS, particularly in rural South Africa and in young women in Africa, has had a profound impact in shaping HIV prevention, policy and programmes in South Africa and at a global level.

Professor Abdool Karim is a Vice-President of the African Academy of Sciences, a member of the UNAIDS Expert Science Panel and Chair of the Prevention of the Technical Task Team of the South African National AIDS Council. She has previously received several prestigious awards, including the Olusegun Obasanjo Prize for scientific discovery and technological innovation from the African Academy of Sciences and the Order of Mapungubwe from the President of South Africa for “outstanding work in the field of HIV/AIDS and tuberculosis research and health policy development”.

Professor Abdool Karim was the first post-democracy National Director of the South African National HIV/AIDS and STD Program established by the Mandela government. She has served as a Technical Advisor to the Nelson Mandela Foundation,  the World Health Organization (WHO), Joint United Nations Programme on HIV and AIDS (UNAIDS) and the United Nations International Children’s Emergency Fund (UNICEF).