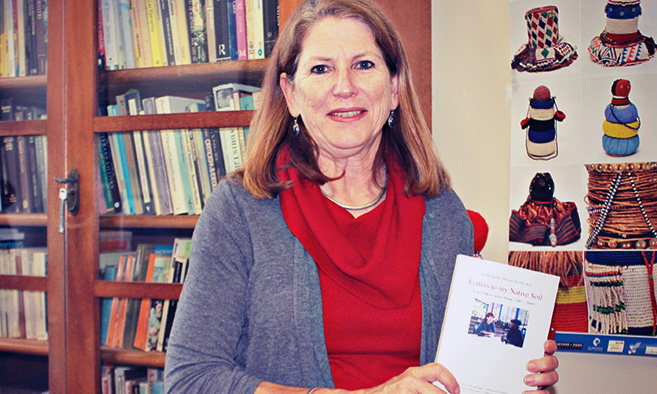 Titled Letters To My Native Soil: Lewis Nkosi Writes Home, the book is an edited collection of Nkosi’s email correspondence with South Africans, more especially between himself and his good friend Stiebel in the later years of his life in Basel and during visits to South Africa since 1994.

The collection, deemed by Stiebel to be the last remaining memoirs of his life, provides insight as to what it meant to Nkosi to be a writer in exile.

Their email correspondence began when Stiebel was working on her first book on Nkosi titled: Still Beating the Drum: Critical Perspectives on Lewis Nkosi. The book also shares emails between Stiebel’s PhD student Litzi Lombardozzi and Nkosi, who had based her doctoral thesis on him.

‘The memory work that appears in the email correspondence between Nkosi and myself and Nkosi and Lombardozzi, represents the closest one can get to Lewis Nkosi’s memoirs now that he is gone. This is their value. What is also valuable about the email correspondence is that - despite the informality that the medium encourages - the deeply serious intellectual engagement of Nkosi in literary debates shines through.’

Within the book, one can find some of Nkosi’s unpublished works and works in progress that cover a 20-year period of critical writing. ‘The inclusion of these pieces attests to Nkosi’s extraordinary intelligence and adds to the story which develops in the email thread. Their inclusion in the book is thus an important resource for researchers working on Lewis Nkosi in particular and South African letters more broadly,’ said Stiebel.

The nearly decade-long correspondence shows how two academic colleagues became friends, thus there is the mix of the public and the personal.

‘What I valued about Nkosi was his engagement not only between me and my family but also the seriousness with which he engaged with my work and the importance he attached to intellectual endeavour. In short, it was an unlikely friendship that apartheid would never have understood: the poor Black boy from Chesterville befriending the middle class White girl from the Berea.

‘Nkosi’s life trajectory was far more dramatic than my own as it turned out, but my privilege was to have been afforded a glimpse into his private thoughts over a decade and that we counted each other as good dependable friends.’

Stiebel, who had stored hard copies of their email correspondence, described the task of poring through all the hard copies as ‘tedious and time-consuming’. However, she feels this has been her most rewarding book thus far.

The book is available online from Amazon and Kalahari and directly from German publisher Lit Verlag.