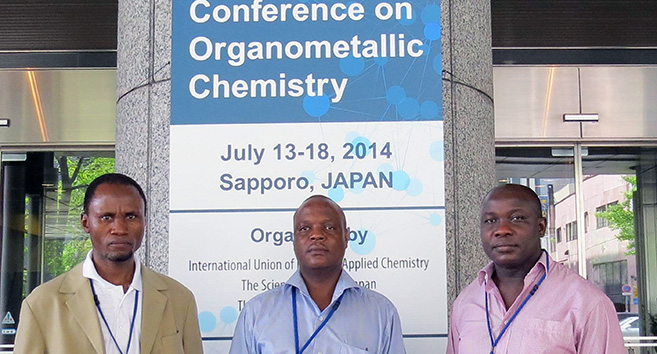 The Conference, hosted by Hokkaido University at its Catalysis Research Centre, was attended by more than 1100 delegates from countries including Turkey, Germany and China in addition to the Japanese delegates.

Four delegates attended from South Africa – the three from UKZN and Professor Johan Venter of the University of the Free State.

Speakers at the Conference included top researchers in the field of organometallic chemistry. The plenary lecturers featured two Nobel Laureates in Chemistry - Professor Akira Suzuki and Professor Ei-ichi Negishi - as well as lecturers from Julius-Maximilians-Universität Würzburg in Germany, ETH University in Zürich, The University of British Columbia in Canada and The University of Hong Kong in China.

Keynote lectures were also presented by representatives from institutions in the United States, France, Germany, Canada and Taiwan.

Presentations by Bala and Nyamori, whose research centres around inorganic, nanomaterials and green chemistry, and Owaga, whose focus is crystallography and organometallic synthesis, were insightful and inspired much discussion among delegates.

Bala presented research conducted by his MSc student, Mr Siyabonga Mncube, on the application of N-heterocyclic carbene complexes of iron for the oxidation of paraffins. Bala is a member of the DST/NRF Centre of Excellence in Catalysis and this is a key project of the Centre aimed at the activation of unreactive paraffins.

His expertise in the chemistry of transition metal complexes of highly reactive carbenes and paraffin oxidation has resulted in the publication of many papers in high impact journals, including a paper recently accepted for publication in the influential Royal Society of Chemistry journal Dalton Transactions.

The title of Nyamori’s poster presentation was: “Application of Mechanochemistry in the Synthesis of Ferrocenyl Derivatives under Solvent-free Conditions”. Nyamori’s his presentation was well-received and inspired interesting discussion and questions, particularly on his synthetic approaches to making organometallic compounds like ferrocenyl derivatives.

This work carried out by his PhD student, Miss Lucy Ombaka, was recently published in the Journal of Coordination Chemistry.  In general, Nyamori found that their research on green chemistry was on a par with that of other invited and renowned researchers based on similar approaches that they have adopted in their work.

Nyamori also said he found the Conference an excellent occasion to make contact with research scientists working along a similar vein in Japan, the United Kingdom, India, Pakistan, Germany and the United States. He has immediate plans to collaborate with two of the scientists he met at the Conference, Professor Tom Baker of the University of Ottawa, Canada, and Professor Audrey H. Moores of McGill University, Canada.

The title of Owaga’s presentation was: “Coordination Complexes of Silver(I) nitrate with 1,3,5-triaza-phosphaadamantane – Interesting Structural Features”. This work was conducted by his MSc student Mr Sizwe J Zamisa and was aimed at investigating the biological activity of these water soluble coordination polymers as antimicrobial agents. This research is being done in collaboration with Dr Peter Owira of the School of Pharmacy and Pharmacology.

The three UKZN delegates found the Conference provided participants with a valuable platform for scientific discussion as well as presenting a springboard to stimulate closer partnerships between academic and industry representatives.

The three UKZN academics acknowledged UKZN and the School of Chemistry and Physics in particular for providing the infrastructure and facilities which made their research possible.  They also thanked the College of Agriculture, Engineering and Science for providing bridging finance for their attendance at the Conference.