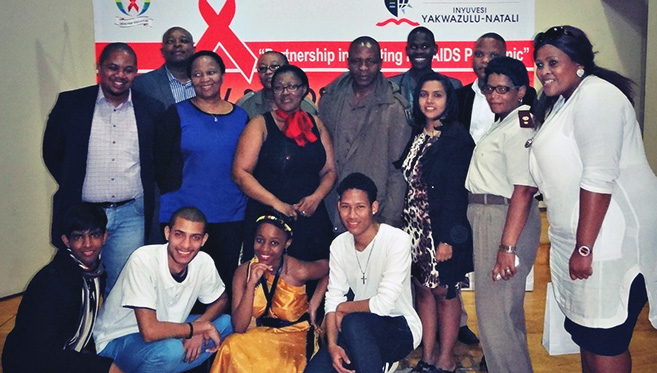 A Right to Respect awareness campaign at UKZN, which aimed to create greater awareness of sexual rights, was hosted by the University’s HIV/AIDS programme at the Howard College Theatre.

The event was officially opened by the Executive Director of Student Services, Dr Sibusiso Chalufu, who welcomed guests.

The main speaker, Dr Maheshvari Naidu, an Anthropologist at the School of Social Sciences, highlighted the recent series of brutal attacks on women.

Naidu’s talk was titled: “Getting Behind the (Fore)skin: Know yourself, Respect Yourself ”. Her address took on a metaphoric standpoint with the emphasis placed on the nature of human beings and their interpretations of identity markers in line with racial, sexual and gender differences, within the broader context of feminism.

‘As a starting point, those identities such as race and gender are not given factual realities but social constructions within different communities of people.  Because they are constructions, does not mean they are fiction or do not exist, rather they have fluid and shifting meanings. They do hold meanings because people have taken on these constructed markers and self-identify as Black, Black African, as White and so on. So we often enact ourselves within these roles of racial and other differences.’

She borrowed from Jacques Derrida’s theory of Différance, and the idea of “to defer”, pointing out that ‘this theoretical borrowing helps us see that sexuality and sexual orientations (and other “differences” can be seen as différances) and are much more complex than what we may want to pigeon-hole and judge them  to be.

‘Adopting this view of “delaying” the assumed meaning, or signification, in the sense of metaphorically looking beyond the foreskin, helps us come a little closer to the idea and behaviour that dis-respect based on judgment and intolerance doesn’t make much sense.’

The notion of “difference” also played a huge role in Feminist theory, said Naidu. ‘Feminist anthropologists have shown how women’s bodies have been appropriated and rendered “docile” and made passive by multiple social realities including cultural or so called traditional practices by men over women.’

She encouraged the audience to – ‘be comfortable in your own skin. Be yourself, because everyone else is taken’.

In her closing remarks, Naidu said: ‘As women in the midst of pursuing degrees and intellectual careers, we should be able to recognise when certain acts of masculinity force us to be complicit even without us being aware of it.

‘Engaging in transactional sex for the consumerist Gucci bag and holiday abroad, giving in to sex just because you do not wish to offend or lose the partner, or giving in to the occasional condom-less sex, because he promises to withdraw in time, makes women complicit to certain masculine sexual scripts. It turns us, the signifiers, into how and what signification the men give us, so knowing yourself  is the ultimate respect you can give yourself.’

Ms Nomonde Magantolo, UKZN HIV and AIDS Support Unit co-ordinator, said, ‘The Howard College Campus HIV and AIDS Support Unit hosted this reproductive health education and advocacy programme in celebration of women’s month. This programme of edutainment was well attended with all five campuses being represented. The audience was very responsive to the inputs and participated in the entertainment.’

First year Anthropology students, known as The Anthros, performed a comedy sketch in which they enacted and parodied stereotypical identity markers, or so called “differences”. This enactment was received extremely well as it also skilfully highlighted the performative nature of identity and difference.

Campus Health clinic and external stakeholders provided critical health and wellness information screening to both students and staff on the day as part of the Right to Respect awareness campaign event.