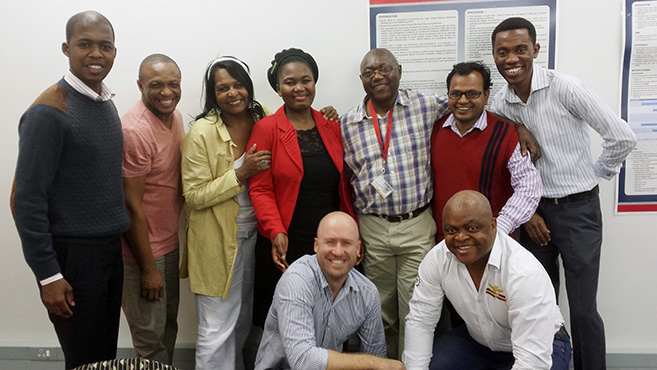 PhD candidates after presenting their proposals to peers and College academics.

Research Proposed by PhD Students Assessed by Peers and Academics

Students who plan to start PhD studies next year presented their proposals at a session held at UKZN’s School of Nursing and Public Health before which they attended an eight-day workshop conducted by the College of Health Sciences Research Office.

The workshop consisted of a series of lectures together with hands-on exercises and presentations by each individual at a plenary session, providing an enabling environment for learning from facilitators and peers who participated in critiquing the presentations. The final output of the workshop was a framework which would form the basis for a full narrative proposal.

College Dean of Research, Professor Moses Chimbari, who led the workshop, said it was important that each candidate presented a proposal before peers and academics who had not been part of the workshop.  This guaranteed candidates received adequate feedback to ensure their studies were at the highest PhD standard.

Senior Tutor in the Discipline of Occupational Therapy, Ms Helga Koch, presented a proposal to explore issues of food security faced by women living with HIV and disability in vulnerable contexts.  Koch said there was a dearth of literature in this field which raised concern because such women and their children were at high risk of suffering food insecurity.

Ms Chantal Christopher’s proposal was around recreational engagement among women in a resource constrained environment. Christopher was concerned that only 47 % of South Africans believed that exercise and fitness were critical for good health, according to a Lancet report of 2014. She believed that women in the Mariannridge community of Durban – the proposed research site – faced a combination of unfavourable factors that impacted on their recreational engagement.

The Physiotherapy Discipline’s Mr Siyabonga Kunene intends to study the alignment of sports physiotherapy education and training together with the professional sports demands and expectations in South Africa, while international candidate, Mr Rashidi Amboko, plans to investigate factors associated with missed opportunities of HIV care among mothers and their infants in Kinshasa, DRC.

Mr Santosh Kumar’s proposal indicates he plans a study in an area where the focus is on improving the efficacy of BCG vaccine by simultaneous inhibition of Th2 and Tregulatory cells, while Mr Emmanuel Asowata of the School of Laboratory Medicine and Medical Sciences proposed an investigation into the diversity of human rotra-viruses and the vaccine efficacy among children under the age of five in KwaZulu-Natal.

He explained that rotavirus had been identified as the common cause of severe diarrhoea among infants and young children yet few studies had been conducted in South Africa focusing on Rotarix vaccine potency.

Mr Hilton Humphries said his study would explore the ecological factors contributing to adolescent risk profiles of HIV infection and how to develop a model to inform future adolescent intervention design. The research would be conducted in the Vulindlela community of KwaZulu-Natal.

Ms Nomvelo Phungula of the Nursing Discipline intends to explore factors that influence inadequate sexual and reproductive health counselling for HIV infected women in the country, given that reproduction poses dilemmas for people living with HIV and for public health and clinical care providers.

With the knowledge and skills acquired at the workshop students are expected to fully develop their proposals by the beginning of October. This process will be done jointly with their degree supervisors.

More information about the College Research Office is available at: http://chs.ukzn.ac.za/research/researchthemes.aspx