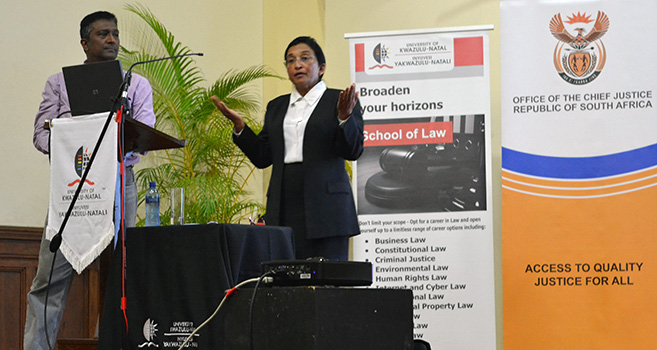 A mindset shift is needed to encourage women to take up positions of leadership, according to Judge of the KwaZulu-Natal Division of the High Court, Madam Justice Dhaya Pillay.

Speaking on Activism Against the Genderisation of Poverty at a UKZN Women’s Month forum, Pillay called on students to contribute towards the advocacy for gender equality.

The lecture, hosted by the School of Law in partnership with the Office of the Chief Justice of South Africa, was part of a national lecture series in which female jurists share their personal journeys with law students with the aim of creating a platform to debate and engage about matters pertaining to the judiciary.

Pillay’s lecture focused on the advocacy of women's rights in relation to gender equality and transformation in the work place. She called for a mind-set shift which will encourage women to take up positions of leadership.

‘Through this lecture, I hope to leave you with a better understanding of feminism and gender advocacy. Women empowerment is not about numbers but it is about enriching the quality of the justice system,’ she said.

Pillay said that in response to the need for more female judges in the judiciary, the Chief Justice of South Africa, Mr Justice Mogoeng Mogoeng, had appointed three female judges to act in the Constitutional Court.

She also called on the students to contribute towards the advocacy for gender equality. ‘It is up to you as an electorate to exercise your democratic right towards shaping legislation and policies aimed at bringing about social change. You should look at how you can participate in fast pacing transformation for the benefit of future generations,’ she said.

After the lecture, students and academics were given an opportunity to share their views and critically engage on the issues raised.

Law academic Professor Karthy Govender said the lectures of this nature not only allowed students to critically engage on the issues raised but it also encouraged men to reflect deeply  on what they can do to support the women in their lives and promote the objective of achieving substantive equality.

After the lecture, students and academics were given an opportunity to share their views and critically engage on the issues raised.