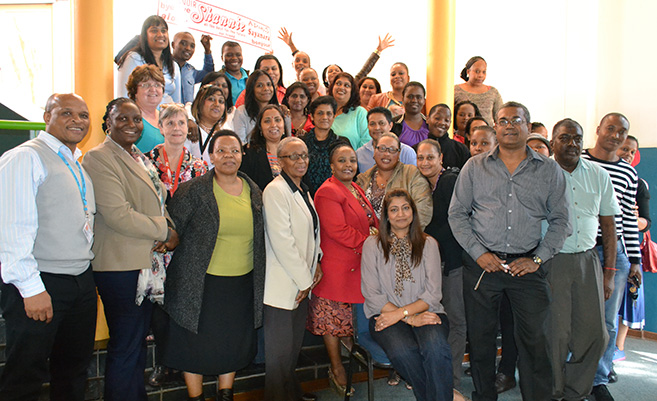 UKZN’s School of Nursing and Public Health employees bid farewell to their Dean and Head of School’s Administrator, Mrs Shannie Maharaj, who is moving to Pretoria after being at the Institution for the past 17 years.

Maharaj started working at the School - in the days when it was known as the Institute of Nursing - as an administrator for the Bridging Programme under the leadership of Professor Leana Uys.

Speaking at her farewell party, an emotional Maharaj recalled her early years at the university. ‘I remember my first day, I was welcomed by Prof Uys who gave me a long document to type.

Dean and Head of the School of Nursing Public Health, Professor Busi Ncama, who has worked with Maharaj for 17 years, said she had mixed emotions about her colleague’s departure.

‘I am happy and sad that Shannie is leaving us. It has been a long journey,’ said Ncama. ‘I am sad the system prevented her from progressing further in the Institution but she inspired me to do more. Shannie pursued her MBA which inspired me to pursue mine. She made me want to develop and grow as a person. I am very sad to see her go. Her attitude to work and her level of confidentiality will be missed.’

She also thanked Maharaj on behalf of the School and the College for her outstanding contribution.

School Manager Mr Bheki Zondo said: ‘I have worked with Shannie for only a year, but I can proudly say working with her was total bliss.’

He described her leaving the Institution as a loss to the Dean and Head of School, ‘I think all those who have had the pleasure of working with her feel the same. I wish her well in her new endeavours. She has a co-ordinated mind, full of energy and was able to prioritise work in the Dean’s office.’

The farewell function was also attended by Former Dean and Head of School, Professor Busi Bhengu.

Bhengu said she was happy Maharaj had reached her potential and decided to move on to Gauteng. ‘Now that you are leaving, I hate to see you go. We congratulate you and your family. It is tough to start a new job, but as a resilient woman I know you will make it,’ said Bhengu.

An old friend and colleague of Maharaj’s, Mr Bongi Hlongwa, said: ‘I enjoyed working with you. You were like a sister to me. You were a good confidant.

‘At one time you had to act as my lawyer and because of you I survived,’ said Hlongwa.

Mr Preggie Pillay, who worked with Maharaj for the past nine years, recalled receiving a warm welcome from her on his first day in the job. ‘Goodbye Shannie, We were a great team. We complemented each other. I am sad to see you go.’

An emotional Maharaj thanked everyone present saying she would have loved to stay, but had found a good opportunity she did not want to miss.