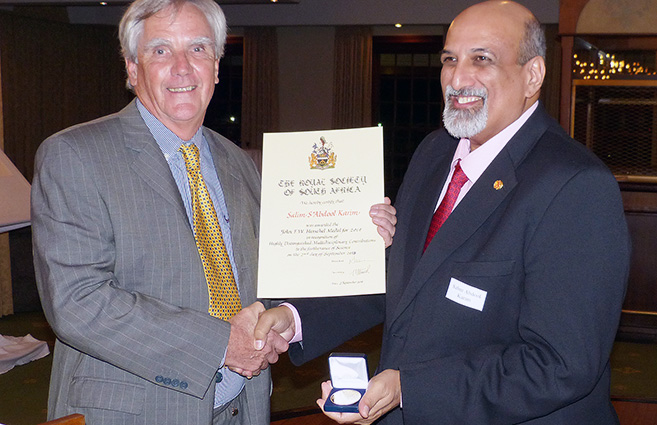 Professor Salim Abdool Karim receiving the John F W Herschel Medal for 2014 from Councillor, Professor Mike Perrin. The medal is awarded in recognition of highly Distinguished Multidisciplinary Contributions to the furtherance of Science.

The President of the Royal Society of South Africa, Professor Donald Cowan, explained that Professor Abdool Karim received this medal for his, ‘exceptional multidisciplinary contribution to science in South Africa’ and ‘marked global impact in the fight against AIDS’.

Professor Abdool Karim, a renowned HIV/AIDS researcher, is the Director of the Centre for the AIDS Program of Research in South Africa (CAPRISA), and Pro Vice-Chancellor (Research) at the University of KwaZulu-Natal. He is also Professor of Clinical Epidemiology at Columbia University and Adjunct Professor of Medicine at Cornell University. He was also, until recently, President of the South African Medical Research Council. His research on HIV prevention and the treatment of HIV-TB co-infected patients have had a marked influence on international policy and approaches.

The Royal Society commended Professor Abdool Karim in conferring him with their highest accolade, stating that ‘Few researchers in Africa, or globally, have been as influential and have had impact of such major consequence on both HIV prevention and treatment…We salute you and your substantial accomplishments.’

‘I am honoured to be receiving this medal, which recognises 25 years of research on HIV. I have been fortunate to have the opportunity to have worked with many great researchers within South Africa and beyond its borders,’ said Professor Abdool Karim, ‘It is a particularly humbling experience to work in a field that started off with so much pain and suffering and to witness today the benefits that science has brought in the way of new prevention and treatments that are saving lives’.