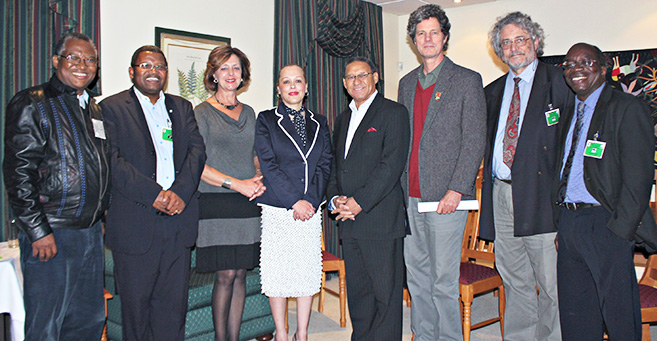 Anti-apartheid activist Allan Boesak highlighted similarities in the parable of love in the Bible’s Gospel of Luke to paths walked by ANC veterans Albert Luthuli and Nelson Mandela, in an address he made at UKZN.

Boesak, who was hosted by the Ujamaa Centre for Community Development and Research in UKZN’s School of Religion, Philosophy and Classics (SRPC), delivered the 6th Annual Mzwandile Memorial Lecture at the Collin Webb Hall.

The Lecture is in honour of the late activist Rodrigues Mzwandile Nunes, a Marxist thinker who contributed immensely towards the realisation of socio-economic justice. Nunes was a staff member of the UKZN through the Ujamaa Centre.

Deputy Vice-Chancellor and Head of the College of Humanities, Professor Cheryl Potgieter, welcomed Boesak describing him as a great academic, global scholar and one of the many exceptional leaders to have emerged from South Africa. She also mentioned that the College was in the process of a Memorandum of Understanding with Boesak’s Butler University to aid in transdisciplinary work.

Boesak’s lecture Just, Brave Men: Luthuli, Mandela and the Jericho Road was taken from a chapter in a book he is currently completing. The larger part of the talk centered on the parable of love in the Gospel of Luke which he likened to pathways (Jericho road) walked by ANC veterans Albert Luthuli and Nelson Mandela. He also looked at Combative Love and Revolutionary Neighbourliness.

Boesak spoke about Mandela’s commitment to freedom and justice, saying Madiba’s motivation came from love for the South African people and not their skin colour.

‘But if the crucial issue here is the issue of combative, revolutionary love rather than a debate about pacifism, there is no contradiction between the Mandela of 1961 and the Mandela of 1990. It was this love for all the people of South Africa, White and Black, that made Mandela make the choice for forgiveness and reconciliation and for him, that love was legitimate,’ said Boesak.

He pointed out that Luthuli’s love for Christ led him not only into the struggle but to radical love for his people irrespective of race and was always done in a non-violent manner.

In closing, Boesak said: ‘Mandela calling for all violence to cease and for his people to respond not with hatred or retribution but with forgiveness and reconciliation, proclaiming that reconciliation has always been at the heart of our struggle for justice and freedom, is it not the wisdom of Luthuli and the deepest traditions of the struggle that have ultimately triumphed? I think so.’