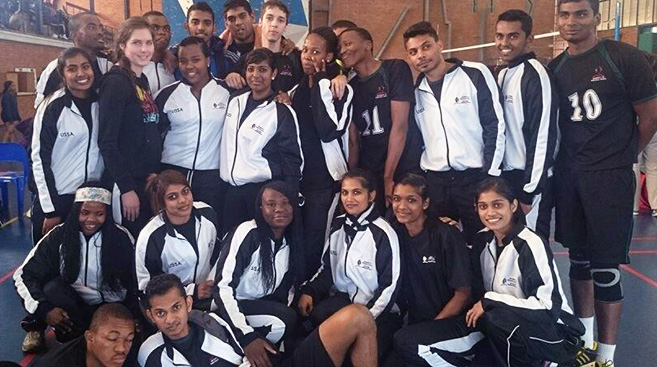 Members of UKZN’s volleyball teams celebrating their achievements at national championships in Gauteng.

Men’s and women’s volleyball teams from UKZN competed at the National University Volleyball Championship held at the University of the Witwatersrand.

Both UKZN teams scooped bronze medals after an intensive five-day competition which saw 22 men and 20 women’s teams from institutions across South Africa compete for medals.

The teams were commended for their sporting prowess and training regimes. ‘Both male and female team coaches must be congratulated for the excellent manner in which they prepared their teams for the tournament. It was quite evident that both teams trained well and could maintain the high standard of volleyball,’ said UKZN University Sports South Africa (USSA) Team Manager, Mr Lawrence Naidoo.

UKZN student Mr Devin O’Regan received a special award for being the “Best Attacker” at the tournament while he and fellow players Ms Atrika Hansraj; Ms Yasmin Rajak and Mr Usangiphile Buthelezi were selected for the USSA National Team.