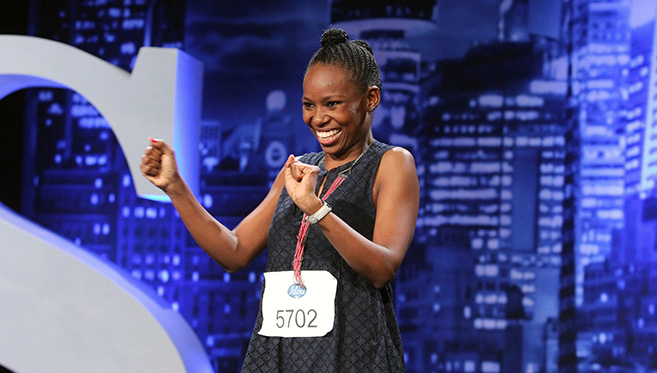 Dr Lihle Buthelezi at her audition.

College of Health Sciences medical alumna Dr Lihle Buthelezi has made it through to the next round of Idols after impressing the judges at the Durban auditions.

Buthelezi, 26, who is currently doing her second year of internship at the Mahatma Gandhi Memorial Hospital and at Addington Hospital, is ecstatic about getting the “Golden ticket” to Sun City. ‘Excited is an understatement. All my life I’ve wanted to pursue a career in music and this Golden ticket is a kick start in the right direction.’

She said if she won the competition she would first complete her internship before focusing on her album and promoting her music career. ‘I’m passionate about chasing dreams and becoming SA’s next Idol would be a vehicle to spread that message to young people everywhere.

‘Medicine is a noble profession of which I am proud to be a part of,’ said Buthelezi. ‘Win or lose I’ll always be a singing doctor.  It’s good to have something to fall back on and that is why I waited.’

She said her family in Ladysmith was very proud: ‘Especially my four-year-old daughter who persistently says: “Mom you must win Idols, OK”.’

Her family has always supported her music: ‘I remember my mom and brothers would come to all my choir festivals at school, even though the boys were not into that kind of music. They’ve put up with me belting out ballads from my room, singing through my hairbrush! I think now, more than ever, they realise I’m serious about music as a career and are right behind me.’

Buthelezi hopes to specialise in Surgery, particularly Vascular Surgery, however public health is also an option. ‘At this stage I’m leaning more towards public health as I need to be free to do other non-medical projects.’

Buthelezi had this message for all young people: ‘There’s always a reason to keep living and pressing on, so what if you fail - you’re better and have learned more than those who have not even tried. And if you win, you’re EVEN BETTER!’

Buthelezi missed an opportunity to go to an Arts school when she was accepted into Medicine: ‘I’ve always been in speech and drama and plays at school. And I’ve also been told that I have a great voice for radio.’