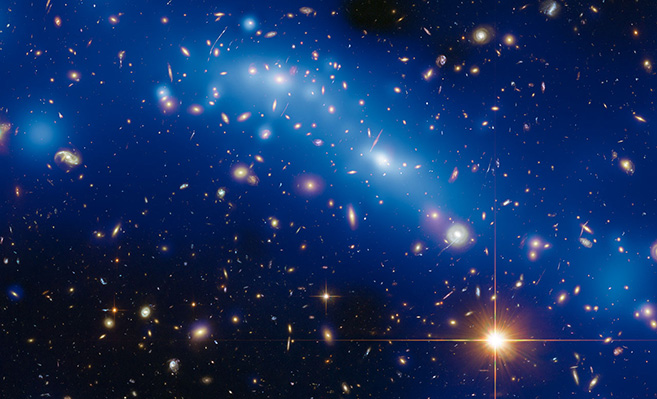 The varying intensity of blue haze in this image of the MACSJ0416, is a mass map created by using new Hubble observations combined with the magnifying power of gravitational lensing.

Two astronomers attached to UKZN’s Astrophysics and Cosmology Research Unit (ACRU) have made groundbreaking astronomical discoveries based on data collected by the Hubble Space Telescope.

Dr Mathilde Jauzac, a former ACRU Postdoctoral Researcher and a current affiliate of ACRU, has measured the mass of a merging galaxy cluster named MACSJ0416, to the highest precision yet.

This has allowed her team, which includes ACRU PhD student Miss Kenda Knowles, to determine the geometry and dynamics of this cosmic collision, approximately 4.5 billion light years away from Earth.

This cluster is estimated to have formed 9.2 billion years after the Big Bang.

Jauzac weighed the galaxy cluster by measuring how it warps the space around it, distorting the apparent shapes of distant objects behind it, like the view through a bathroom window. This distortion is known as gravitational lensing, a phenomenon that was first predicted by Albert Einstein.

When the cluster is massive enough, such as in this case, and the distant object is aligned right behind the cluster, the distortion effects can be quite dramatic: the images of normal galaxies can be transformed into rings and sweeping arcs of light, even appearing several times within the same image. As a result, one background galaxy can be transformed into several magnified images of the same source. This is referred to as a multiply-imaged system.

The HFF initiative enabled Astrophysicists to see the faint galaxies behind the already distant MACSJ0416 cluster, so that more multiple images could be detected than ever before.

Jauzac’s discovery shows the accuracy that can be achieved with the high quality of HFF data in terms of estimating the mass of galaxy clusters from gravitational lensing. In astrophysics, masses of objects cannot be measured directly and instead, must be inferred indirectly via other observations. This makes mass estimation a tricky business and prone to various uncertainties.

The new HFF data reduces the significance of these errors due to the unprecedented depth at which it probes the Universe, collecting data that is of an improved resolution and higher overall quality. The resultant mass estimates allow for better cosmology which translates to better modelling of the Universe.

‘By using ultra-deep Hubble Space Telescope images we were able to discover “faint” (distant) background galaxies that are gravitationally lensed by the cluster, and thus magnified,’ said Jauzac. ‘The amount of magnification shows us what is happening in the cluster, and, as some of the most distant objects known, they are interesting in themselves, since they help us to understand the environment of the distant Universe.’

A Lensing Workshop was hosted by ACRU and funded by the National Research Foundation in January 2014 in order to analyse the first set of HFF data, and to introduce gravitational lensing to the South African science community. It was whilst working on one of the projects at the workshop that Knowles discovered a new multiply-imaged system, leading to her inclusion in the international collaboration. She assisted in the discovery and confirmation of other multiply-imaged systems which were used to provide a better estimate of the mass of MACSJ0416 thus allowing scientists to have a better understanding of the structure of the newly discovered galaxy.

This work of Jauzac and Knowles brings new information as to what is physically happening in this massive, merging galaxy cluster, and begins to answer difficult questions relating to cluster dynamics of merger processes and the evolution of structure formation in the Universe.

Jauzac and Knowles, along with their international collaboration, will continue their work by studying the five other galaxy clusters that are scheduled to be observed during the next segment of the HFF initiative.

In 2013, Jauzac made international headlines when she used the Hubble Space Telescope to discover the three-dimensional structure of a cosmic filament associated with a different galaxy cluster.