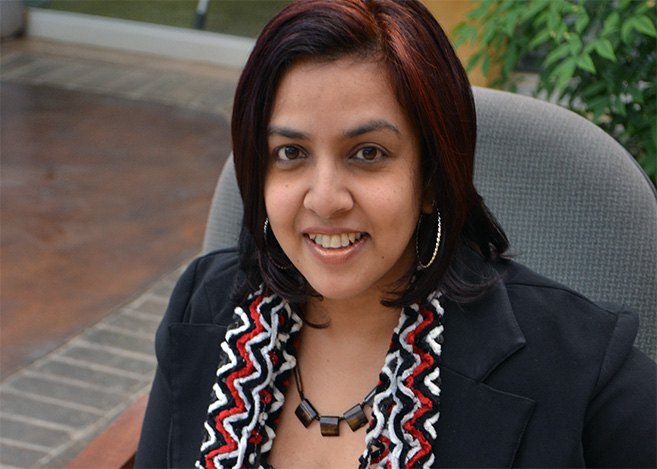 Humanities academic and Anthropologist at the School of Social Sciences, Dr Maheshvari Naidu, who is the Top Published Woman Researcher at UKZN for 2014.

Dr Maheshvari Naidu is the Top Published Woman Researcher at UKZN for 2014 and is placed third overall in the University’s research rankings.

Naidu, a Humanities Academic and Anthropologist at the School of Social Sciences, has featured several times in the Top 30 rankings, achieving ninth place in 2009.

She was also one of the national winners for the Department of Science and Technology (DST) Women in Science Awards (WISA) in 2013 for her work in the fields of Gender and Violence.

Naidu’s area of completed research is squarely placed in gender and feminist studies and is a sustained research vector that cuts across her ethnographic work in the disciplines of anthropology, religion and mobilities studies.

When asked about what the recognition meant to her, Naidu said it indexed sustained work she felt was a vital part of being an academic. Research within the Humanities was for her, about creating and contributing to fluid bodies of intellectual capital that were semiotically and inherently ‘creative” in the sense of being potentially innovative and resourceful.

‘Such a resource allows one to conceptualise this capital in wider knowledge economies and knowledge ecologies and draw thereon within applied and collaborative public contexts that make real time connections with the substantive world,’ she said.

Naidu added, however, that she joined other academics, many on the Top 30 list, who had concerns around the Department of Higher Education and Training (DHET) privileged publications in journals.

‘This is a discussion that academics have attempted to raise on several occasions, at various forums. It would be naive to assume that some of our colleagues, who are not on the list, are not research active, as in many instances, this work is in the form of books and chapters, and sometimes in journal publications not the DHET list.’

Naidu stated that while incentivisation was a necessary mechanism, in many contexts, its effect could also be invidious. She referred to a recent paper by Hasrati (2013) which goes as far as arguing thatmaterial and credentialing incentives could be regarded as a kind of soft “violence” in the exercise of disciplinary power, detailing how publishing has become (overly) instrumental in order to receive research funding and promotion.

She added, however, that most academics worked on the twin feit accomplis that that doing research was critical, and that publishing that research was both evidence of having done research, as well as more importantly, having done ‘good research’ that had been peer-reviewed, and which was able to contribute some social value.

‘That said; when publishing and the number of publications becomes the dominant index of “the good researcher”, we suffer the possibility of ghettoising that which is potentially beneficial about doing research.’

Naidu added that as the key to both achieving (legitimate intellectual) visibility and garnering (sometimes questionable) quantifiable “impact factors and citations’, was easily accessible distribution of work, many were understandably keen to get published. This, she said, was complicated by the “material and credentialing’ power assigned by DHET to getting published in accredited journals as opposed to books, for example.

‘We enjoy - as we should - our hard earned success in journals with a sustained tradition of what is widely perceived as good quality scholarship. Yet in incentivised “bean counting” exercises, the good quality journal as well as its “ugly sister” (journal) both get the same full point.’