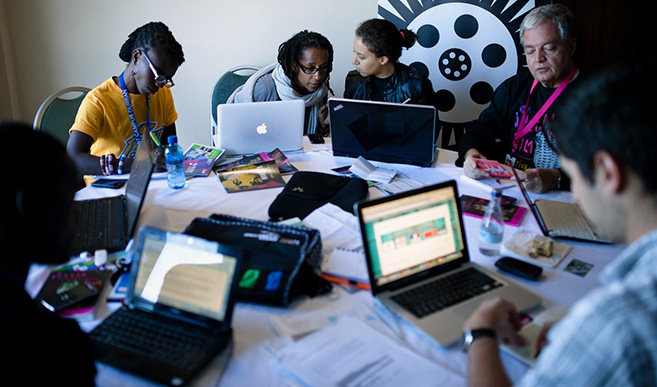 Filmmakers at the seventh edition of Talents Durban.

The programme consisted of master classes, in depth discussions with critically acclaimed film professionals from across the globe, hands-on training programmes as well as networking opportunities for selected participants.

Talents Durban participants were able to participate in a co-production master class with French producer Denis Vaslin, who is a producer of documentaries and fiction.

Australian documentary development expert, Julia Overton, presented a Documentary Finance master class on Documentary Financing. Overton is a Development and Investment Manager at Screen Australia where she is instrumental in assisting filmmakers with getting their projects produced with local or international support.

Speaking at the DIFF media conference, Project Manager, Ms Tiny Mungwe, explained that Doc Station selected three documentary projects in development for coaching and mentoring towards participation in a public pitch at the DFM’s pitching forum – The African Pitch.

Participants were given mentoring prior to the pitch and during preparations at the festival. After the pitch they were given advice from mentors on how to proceed with their projects.

‘Script Station is a script development programme for short films which paired four participants with script editors who assisted in clarifying stories and getting to an advanced draft of their script,’ said Mungwe.

‘Talent Press is presented in co-operation with Fipresci, an association of national organisations of professional film critics and film journalists from around the world which lobbies for the promotion and development of film culture and for the safeguarding of professional interests. The programme invited four critics to cover the films and events of the Durban International Film Festival for online and print publication,’ she said.

DIFF Festival Manager Mr Peter Machen added: ‘DIFF welcomed these filmmakers to the Industry Programme and we were proud to have presented them as the future of African Cinema. The diversity of voices in this selection echoed the theme of this year’s Talents Durban – Continent of Contrasts/de Contraste – inspired by a revered elder of African cinema Djibril Diop Mambéty whose 1968 short films was entitled Contras’city (City of Contrasts).

‘We hope this crop of Talents at DIFF will follow in the footsteps of giants of African cinema.’

The 35th Durban International Film Festival is organised by UKZN’s Centre for Creative Arts  and is a special project of the Deputy Vice-Chancellor of Humanities, Professor Cheryl Potgieter.