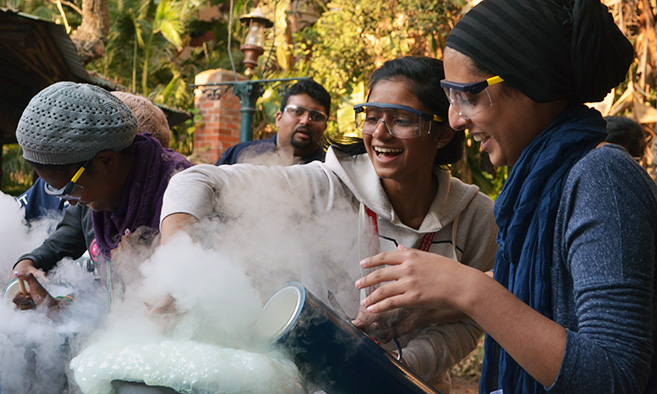 High school pupils being “scientists” thanks to UKZN.

A vibrant group of 55 pupils from various schools in KwaZulu-Natal took part in an exciting, week-long initiative within the College of Agriculture, Engineering and Science during the July holidays, which allowed them to experience "Being a Scientist for a Week".

Currently in its fifth year, the programme is primarily focused on engaging young minds with the array of exciting career opportunities available in the sciences through study within the College.

Over the course of the week learners were introduced to the various disciplines within the College’s five Schools through a variety of interactive learning experiences, talks and tours of several of the disciplines offered by each School.

The week started with the youngsters interacting within the discipline of Astrophysics and Cosmology, where they were divided into teams each needing to build a replica model of the solar system with materials provided. The students were given the added initiative of an exciting opportunity for the winning team to take home a prize at the end of the week.

The pupils also spent time with graduates in the discipline of Microbiology where they took part in interesting activities such as making yoghurt and learning about the general relevance and importance of the discipline.

Not to be outdone, the Chemistry section revealed the secrets of making ice-cream out of liquid nitrogen and milk as well as allowing them to experiment in the laboratories.

The students also paid an educational visit to the Ukulinga Research Farm, where they were exposed to various Agricultural disciplines.

The excitement among the students was tangible and many of them identified the programme as the perfect introduction to establishing a career direction for themselves.

‘Be a Scientist for a Week’ forms a part of a number of useful and dynamic initiatives run by the College, which seek to engage and expose young folk to the multidimensional and diverse fields of opportunity that study at UKZN’s College of Agriculture, Engineering and Science allows.

This programme is also aimed at actively addressing the need to emphasise the relevancy and overall importance of the sciences within the consciousness of South African youth and school-leavers.