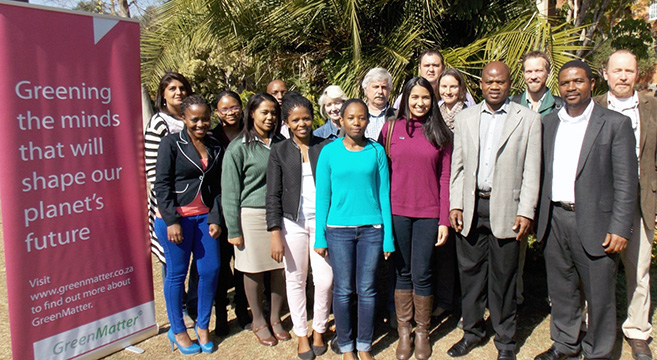 UKZN and GreenMatter stakeholders during a break at a strategic meeting held at UKZN.

The School of Agricultural, Earth and Environmental Sciences hosted a meeting of GreenMatter stakeholders recently.

GreenMatter, an initiative that drives transformation in graduate level skills for Biodiversity, is led by the Executive Director, Dr Sibusiso Manzini, who met with delegates from the School in order to provide an update of their strategy since 2010.

GreenMatter’s co-founding partners, the South African National Biodiversity Institute and the Lewis Foundation, led the development of a Biodiversity Human Capital Development Strategy (BHCDS) in 2009-2010. This strategy was aimed at producing specialist, research and management skills for all organisations with biodiversity mandates, objectives, interest or impact, in the context of skills shortages, the need for social transformation, and opportunities for growth and employment in the greening of the South African economy.

GreenMatter operates through the involvement of a range of organisations, institutions and partners which include NGOs, SMMEs, parastatals, national and provincial government departments, Higher Education Institutes (HEIs), SETAs and business organisations, to deliver through a shared implementation model on the needs for quality skills and transformation.

Manzini reported on the significant progress made since 2010 while stakeholders identified the need for greater collaboration among fellows and those who are outside GreenMatter.

It was agreed that GreenMatter had already started to contribute to the Government’s National Development Plan but that there were further opportunities for it to do so, particularly in the context of the Millennium Development Goals.

Applicants can either already be enrolled in their course or be commencing study in 2015. The deadline for applications is Friday, 29 August 2014.

Senior GreenMatter fellow, Professor Albert Modi, said he was very pleased GreenMatter had chosen UKZN for the meeting and encouraged UKZN staff and students to apply for the 2015 fellowship awards.