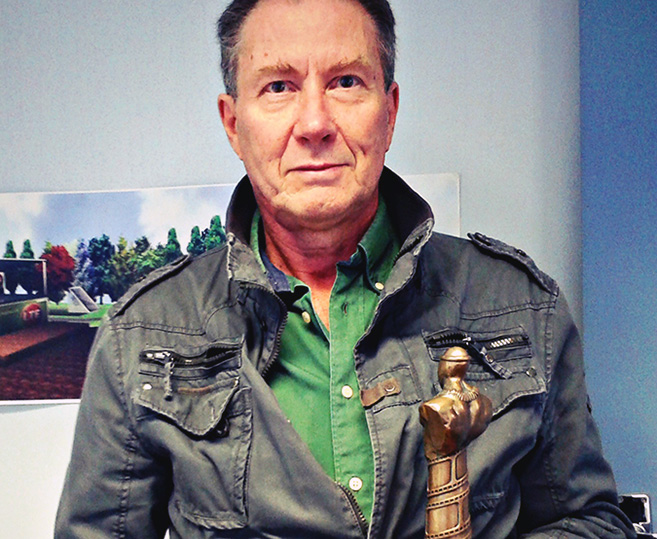 Media Studies Professor Keyan Tomaselli of the Centre for Communication, Media and Society (CCMS) has won a prestigious film award.

Sabela was South Africa’s first Black film director and Tomaselli is the first film researcher to study the director’s work which he did in his recently re-issued book, The Cinema of Apartheid:  Race and Class in South African Film (Routledge, 1988, 2014).

Tomaselli was selected for this particular accolade in recognition of his lifelong contribution to building up the film industry; his policy work for the Department of Arts and Culture (DAC) which resulted in the White Paper on Film; the Film Strategy Document and the establishment of the National Film and Video Foundation.

Accepting his award, Tomaselli dedicated it to Simon Sabela whose premature death he felt had robbed the industry of a great democrat and pioneering director. ‘The Awards as a whole indicate a wonderful inclusiveness in their selection because film makers and actors are recognised for their contributions, their potential and not their politics,’ he said.

Tomaselli’s keen interest in film and the visual arts evolved from being a hobbyist and social activist capturing anti-apartheid protests while a student at Wits University to shooting footage on surf culture and wildlife on Super-8 and 16mm reels for commercials.  He later worked in TV and was part-owner of a film sound studio.

Tomaselli’s skill as a professional cameraman was bolstered by his astute understanding of how the technical processes of script-writing, editing and production were closely connected to seemingly unrelated aspects of film - such as the current political climate, funding considerations and film theory.

As a Scholar/Scriptwriter/Producer/Cameraman whose career in the film industry spans almost 40 years, Tomaselli has proven that he is a legend. Adding to this, he also served on the KZN Film Commission’s steering committee during its first phase, and his students’ films have been screened over the years at the Durban International Film Festival (DIFF) as well as by SABC-TV and DSTV.

His most recent book on film is Encountering Modernity:  20th Century South African Cinemas (UNISA Press 2007), and he launched the Journal of African Cinemas in 2009 which is published in the United Kingdom.

Students interning as journalists at DIFF this year report that Tomaselli is the talk of the festival, with the new CEO of the Film and Publication Board even telling a public panel on the Board’s work that he had himself been educated in film at Wits in the 1970s by Tomaselli.

This presence is also boosted by Tomaselli’s intervention at the 2013 Festival when he helped to rally academics, the industry and film organisation across the world to oppose the banning of the opening film, Of Good Report.

The processes arising, and his research emanating from this incident, not only witnessed the unbanning of the film which closed the 2013 Festival, but also in the Film and Publication Board rethinking its assumptions and role.

Masters students from the CCMS are using the Festival as a research site in conducting research into Durban film friendliness, of which the festival is a key driver.