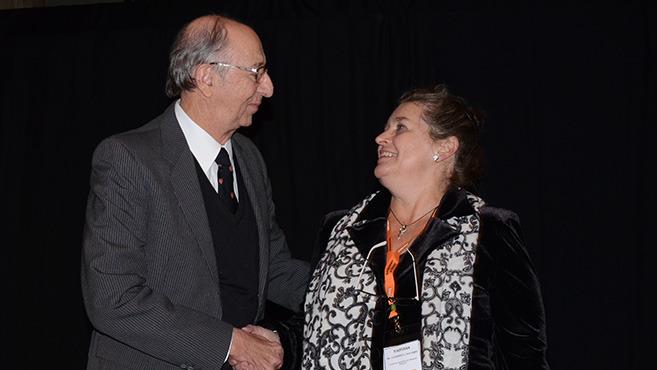 Eminent Physicist, Academic and Senior Research Associate at UKZN, Emeritus Professor Manfred Hellberg, has been awarded the highest honour of the South African Institute of Physics - the 2014 SAIP De Beers Gold Medal - for his outstanding contribution to the Discipline of Physics.

The award is in recognition of his ‘achievements as a researcher and his significant role in the promotion of Physics in the South African Physics community’.

‘The greatest part of Professor Hellberg’s scientific career was spent at this University and its successor, the University of KwaZulu-Natal, where he is currently Professor Emeritus and Senior Research Associate. At his home institution he has held senior administrative positions, including Dean of Science, and acting deputy vice-chancellorships.

‘Professor Hellberg’s research area involves theoretical studies of the properties of plasmas, in particular on linear and nonlinear electrostatic waves in kappa-distributed plasmas.  His work includes, among other topics, studies on linear waves also involving Maxwellian plasmas and soliton behaviour, and most recently, solitons beyond the double layer speed and supersolitons.  His papers are highly cited.

‘Professor Hellberg has held numerous distinguished research fellowships, including the Von Humboldt Fellowship and fellowships at Princeton University.  Among the other academic distinctions he has received are fellowships of the Royal Society of South Africa, the UK Institute of Physics and the honorary membership of the SAIP.

‘A member of the South African Institute of Physics since 1962, Manfred Hellberg has served and continues to serve the broader Physics community in a variety of functions.  These include a term as president of the SAIP, representation internationally in the International Union for Pure and Applied Physics (IUPAP) and activity on many councils and boards.  Most recently, he has acted as convener of the panel for the report: “Shaping the Future of Physics in South Africa”, which has had a fundamental and extremely positive impact in the physics community.  He also headed the Astronomy Desk at the Department of Science and Technology in a time crucial to South African astronomical projects and collaborations.

‘Professor Hellberg is awarded the SAIP De Beers Gold Medal for 2014 for his outstanding research career in Plasma Physics that has earned him international recognition in this field and for the numerous contributions he has made in his service to Physics in South Africa, and, with his significant experience, represented South African Physics internationally.’