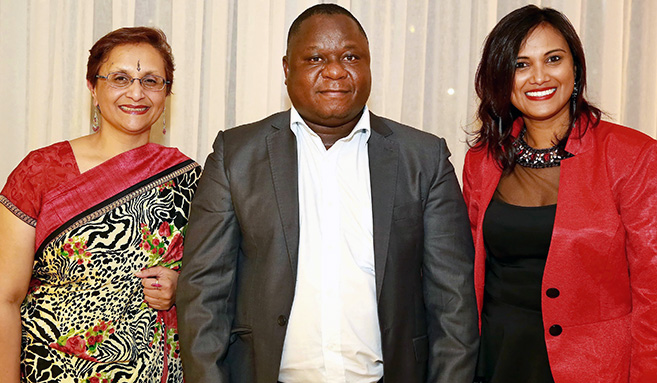 Two UKZN academics who received the Distinguished Teachers’ Award during 2014 Graduation ceremonies were feted at a gala dinner hosted by the Teaching and Learning Office.

The academics are Associate Professor in the School of Mathematics, Statistics and Computer Science (SMSCS), Professor Simon Mukwembi, and Professor Sarojini Nadar of the School of Religion, Philosophy and Classics.

Deputy Vice-Chancellor: Teaching and Learning, Professor Renuka Vithal, said the awards were designed to recognise innovative teachers of a high calibre. Among the ways the teachers had distinguished themselves were by regularly participating in a range of activities over time, including conferences, the University Education induction programmes, and guest lectures.

Guest speaker, Professor Philemon Akach, who is a Lecturer and Chair of the Department of South African Sign Language (SASL) at the University of the Free State, gave the audience a brief history on the origins and development of sign language.

A recipient of the Higher Education Learning and Teaching Association of Southern Africa (HELTASA) National Teaching Excellence Awards (2013), Akach said many people around the world did not understand that sign language was not universal. He explained the five parameters sign language was based on: hand form, location, movements, orientation and facial expression.

‘Sign language is a language and should be treated properly,’ said Akach encouraging the audience to take the initiative and learn the South African sign language.

Mukwembi expressed his delight at receiving the award. ‘I am indeed humbled. It feels good to be recognised for what you do.’ He added that his legacy is what his students say about him.

With more than 14 years of teaching experience in the field of mathematics, his roles include working as a Teaching Assistant, Tutor, Demonstrator, Lecturer and Senior Lecturer at different universities, including the University of Zimbabwe, the Zimbabwe Open University and the Masvingo State University. He has been at UKZN since 2006.

Nadar is one of UKZN’s Top-Published Researchers and has a C2 rating from the National Research Foundation. She received UKZN’s Research Award for the Top Published Woman Researcher in 2009 and is regularly featured among the Top 30 UKZN researchers.

Nadar said there was no time like the present to study Gender. ‘South Africa has one of the most liberal constitutions in the world but still has the highest levels of gender inequality and gender violence.’

She acknowledged the support of her husband and two sons, her friends, colleagues and her students for making the award possible.