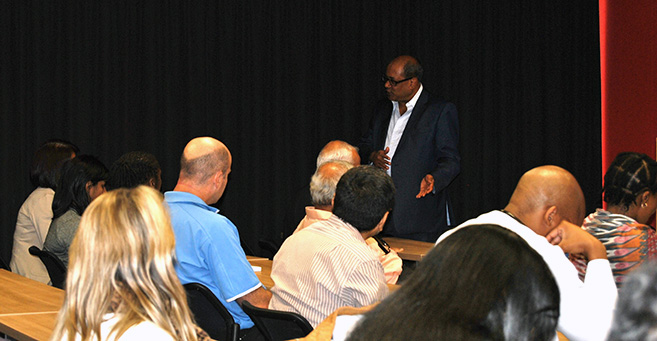 The Fat of the Matter

“Cholesterol and Heart Disease: The Fat of the Matter” was the title of a presentation at UKZN by visiting United States Academic, Professor Ishwarlal Jialal.

The focus of the talk was on low density liproprotein (LDL) as the fat that matters.

Jialal specialises in cardiovascular diseases and endocrinology, especially diabetes, and is currently the Director of the Laboratory for Atherosclerosis and Metabolic Research at the University of California. He is also a Distinguished Professor of Internal Medicine in the Division of Endocrinology, Metabolism and Diabetes and the Stowell Endowed Chair of Experimental Pathology.

‘LDL cholesterol and diabetes are major risk factors for cardiovascular disease. As your total cholesterol goes over 200mg/dl (5.2 milliMolar), there is exponential increase in cardio vascular (CV) mortality,’ said Jialal.

South Africa has a very high rate of cardiovascular disease (CVD) which is the leading cause of death in middle-aged and older adults. A high level of bad or low density lipoprotein-cholesterol (LDL-C) is a major risk factor.

‘The primary prevention of high cholesterol is a diet that is low in saturated and trans-fats, calorie reduction and 150 minutes of exercise a week. Generally, these lifestyle changes need to be combined with statin therapy to prevent heart disease,’ said Jialal. ‘Statins are powerful drugs that can lower cholesterol levels and are backed by excellent clinical trial data showing benefit.

‘Cholesterol is important as a precursor for bile acids which are essential for fat absorption, steroidogenesis (cortisol, sex hormones etc) and integrity of cell membranes.

‘Lipoprotein molecules comprising protein and phospholipids allow for the transportation of lipids (fats) like cholesterol and triglycerides in the bloodstream.

‘Low-density lipoprotein (LDL) molecules are regularly referred to as bad cholesterol because they can transport their content of cholesterol molecules into the artery walls and attract macrophages, and thus drive atherosclerosis,’ he said.

Jialal carefully reviewed and emphasised the important role of inflammation from the early lesion of fat build up in the arteries until a heart attack, citing various biomediators including C-reactive protein (CRP).

‘CRP can be measured in the blood to assess CVD risk. Since LDL particles also transport cholesterol into the artery wall, they are retained there by arterial proteoglycans and attract macrophages that engulf the LDL particles and start the formation of plaques, increased levels are associated with atherosclerosis.

‘Blood tests typically report LDL-C, the amount of cholesterol contained in LDL. LDL-C is usually used to assess how much low density lipoproteins are driving the progression of atherosclerosis.’

He reviewed the various familial syndromes including Familial Hypercholesterolemia (FH) and Familial Combined Hyperlipidaemia (FCHL) resulting in premature heart disease including children with FH. He also cautioned that FCHL was the most common familial syndrome as is the “plague” of the Indian and possibly the White population and needed to be the target of future research in South Africa. He also discussed the role of a new protein, PCSK9 in cholesterol metabolism and premature heart disease.

* Professor Jialal specialises in cardiovascular diseases and endocrinology especially diabetes and is currently the Director of the Laboratory for Atherosclerosis and Metabolic Research. He is also Distinguished Professor of Internal Medicine in the Division of Endocrinology, Metabolism and Diabetes and the Stowell Endowed Chair of Experimental Pathology at the University of California, Davis Medical School, Sacramento, CA, USA.