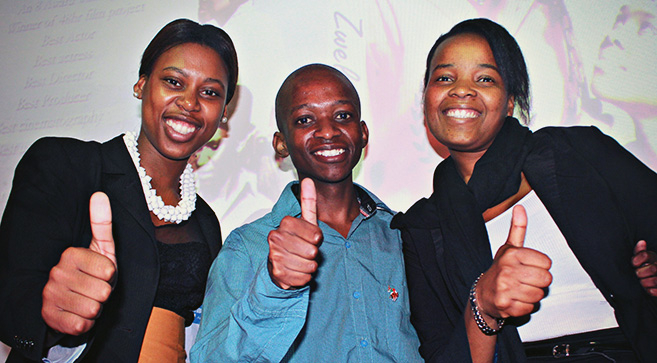 The short documentary films were recorded, edited and produced as part of the students’ fieldwork for the first semester, marking their debut in research.

‘These are previous students from the African Music and Dance programme who recently graduated with a BA Music and Drama Performance degree and have opted to pursue an academic track for their honours in Applied Ethnomusicology. The course draws heavily on their previous experience as performance students as they now frame their research questions in their current studies,’ said Opondo.

The first showing was of the film Phila Ekuphileni NeZion by Ms Nontobeko Sibiya which is on the Zion Christian Church (ZCC), one of the largest African initiated congregations in Southern Africa. She focused on the church’s spiritual healing. ‘Doing this documentary I learned that culture is important and should be celebrated and preserved.’

Mr Nhlakanipho Ngcobo’s film was a short story titled Y-tjukutja ANC which looked at struggle songs in post-apartheid South Africa. ‘This year South Africa celebrates 20 years of democracy. Revolutionary songs played a big role for South Africans to achieve democracy. There are debates about the role of revolutionary songs in the post-apartheid era and whether they should be preserved or banned or do they serve as a communication medium or promote hatred among race groups.’

Ngcobo hopes that his documentary will shed some light on these issues.

The final screening was of Ms Thabile Buthelezi’s film My Africa, My Dance- Biography of Lucky Cele which featured Programme Facilitator/ Senior Choreographer Mr Lucky Cele of the Mzansi Arts Development Ensemble (MADE) - a non-profit and community-driven organisation.

‘It was both a learning experience and a challenge for me. I got to work with Lucky and attend his dance workshops often incorporating and learning their dance techniques and styles,’ said Buthelezi.

There was a guest appearance by Mr Siphamandla Ngcobo, a former AMD student, who presented his work Zwelihle, which won him eight awards and led to the film being selected to represent Durban at Filmapalooza in New Orleans.

He advised the honours students to find their passion and work hard. ‘Success doesn’t come to you. You have to go and get it. Open your own doors to success.’

Opondo said: ‘I am most impressed by what the students and alumni have been able to achieve after a three-year AMD degree. The module African Music Outreach: Documentation is an elective in the third year for undergraduate students and a core course at the honours level under the rubric Ethnographic and Video Documentation of Ritual and Performance. It is one of our vital courses which has resulted in our second filmmaker making an impact in KwaZulu-Natal and internationally.

‘Our 2010 honours student Mr Khulekani Zondi has also won a number of international awards and is currently studying filmmaking in the UK with a full scholarship. I am hoping to get our current exceptional honours student Mr Nhlakanipho Ngcobo to present his ethnographic film at the upcoming International Council for Traditional Music Applied Ethnomusicology symposium at the University of Fort Hare at the end of this month.’