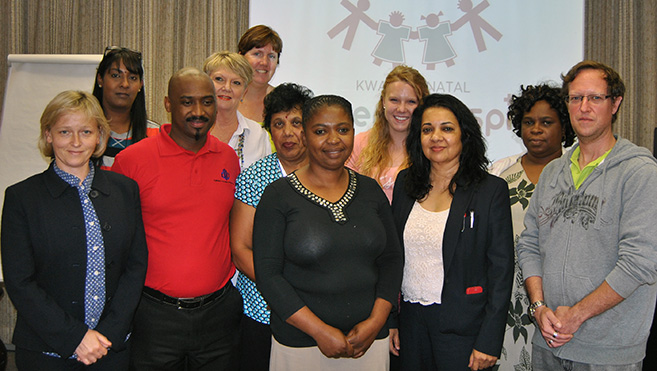 Members at an MRC/info4africa forum where the KwaZulu-Natal Children’s Hospital came under the spotlight.

info4africa is a self-funded Centre at the School of Applied Human Sciences within UKZN’s College of Humanities which hosts regular forums in co-operation with the Medical Research Council (MRC).

The speaker was Dr Arthi Ramkissoon, the Founder and CEO of the newly named KwaZulu-Natal’s Children’s Hospital, who said with 3.5 million adolescents in KwaZulu-Natal, the specialised children’s hospital would be a critical element of health care service provision in the province.

Built in 1928, the hospital, formerly known as the Addington Children’s Hospital, was the first children’s hospital on the African continent. However, with the many internal and external struggles during the apartheid era, the hospital was closed by the government of the day because it provided services to children of all races.

During the 28 years the hospital was closed, the buildings fell into disrepair and some were occupied by vagrants.

Then in 2009 the KwaZulu-Natal Provincial Government gave the green light for renovations to proceed.

‘We are trying to achieve a hospital that is green, children and parent-friendly and open for everybody without cost. As the custodians, the Department of Health will assist once the hospital is up and running as we aim to be a dedicated children’s hospital of the province,’ said Ramkissoon.

Services that will be available at the Children’s Hospital focus on specialised lower level primary health care out-services, providing rudimentary assistance and assessment services for children. ‘The focus will be on the lower levels of health care. Not very acute or high tech, but with more services like rehabilitation and child psychiatry,’ he said

The hospital will have a Growth and Nutritional Centre; Regional Paediatric and Adolescent Training Centre, sections for Paediatric TB and Counselling, Rehabilitation, Occupational Therapy, as well as accommodation for parents to stay overnight, and for volunteers and staff.

‘Our aim is for the hospital to be a place where kids can undergo rehabilitation and therapy in an environment where they feel normal. We want to have a place where a wheelchair bound child and a mobile child can play together, where all children can interact and feel comfortable,’ said Ramkissoon

Many of the existing buildings need to be refurbished and restored as close as possible to their original state, since they are heritage structures. ‘We couldn’t comply with certain aspects like corridor lengths due to the old buildings being built a certain way. We have, however demolished a certain area. A lot of the progress depends on funding. Restoration of sculptures, mosaics, tiling, ceramics, stain glass and art has been salvaged.’

The renovation of the hospital will occur in four phases, with two phases already completed. The final two phases are heavily dependent on funding.

‘R50 million has been provided by the KwaZulu-Natal Department of Health with a further R400 million being needed for repairs to the roofs, restoration of the interiors and renovations to various main hospital buildings as well as a basement for parking.’

Naming rights are available for corporations or individuals who can increase their name recognition by contributing to the building efforts.