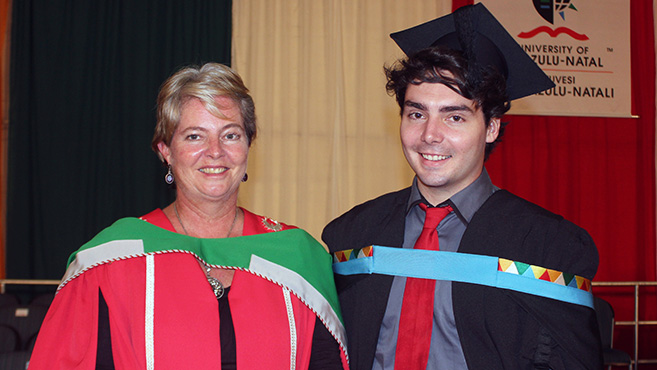 A passion to be a writer attracted Mr Warwick Jones towards following a media studies course at UKZN.

‘What originally drew me to media was the idea of journalism and becoming a writer in one form or another. As I progressed through my studies, Media began to open up as my favourite subject because it offered me an avenue into the writing world.’

His love for media allowed him to pull together Psychology, Sociology and English into one subject. ‘Within the Media subject I was asked to critically engage with texts, with society, with the psychology of human interaction, and ultimately – with myself,’ he said.

Jones spent a lot of time delving into media. ‘The media courses were wildly interesting. In one of our third year English classes, Bambi Ogram was running a course on South African literature but at her opening lecture she spoke about the history of South Africa – focusing a lot on the end of apartheid.

‘It was one of the most beautiful lectures I’ve ever experienced – and by the end of it, our entire class had goosebumps. More than anything else, that lecture illustrated everything that is right with this country. We left with hope and inspiration.’

He also reflected on his favourite course “Writing for the Media”. ‘It was definitely the most work I’d ever had to put into a single course – but Dr Nicola Jones gave us a chance to use our voices. We felt like what we had to say actually mattered; and we learned to fight, in that tiny little classroom in the corner of Old Main Building, for exactly what we believed in.’

Speaking on his support from family and friends, Jones said: ‘My family was amazingly supportive. My friends were probably the reason I managed to finish my degree. We managed to motivate each other a great deal.’

‘My mom Dr Nicola Jones, though, is probably the most inspiring human being on the planet. She has such an emotional tie to this University, and she wants to make it the best she can. She had time to offer me sage advice when I needed it. I owe her my tertiary education, and more than I can ever explain.’

Jones is currently completing his Honours in Media at the University and plans to pursue his masters part-time, while working and travelling.