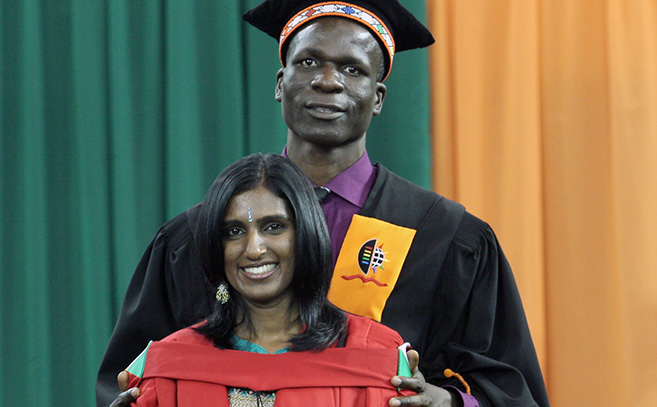 Her study focused on how the body fights HIV infection and more specifically the workings of the body’s immune proteins that can block or fight off HIV infection.

Her study focused on a new arm of the human immune system which is made up of proteins called host restriction factors (HRFs). HRFs are proteins found widely in human cells and are able to destroy or inactivate HIV.

‘The study of such factors may lead to development of new therapies or vaccines, particularly for heavily affected populations,’ she said.

Reddy investigated the HRF, APOBEC3G in a cohort of HIV-infected individuals in Durban, and the role it played in making people resistant to infection or to disease progression.

This protein was shown in laboratory experiments to have the ability to inactivate or severely disable HIV. However, there was little evidence of its anti-HIV effects within the body.

‘I have studied people heavily affected by HIV/AIDS in South Africa. I previously identified various naturally occurring genetic variants/mutations of APOBEC3G, and some of these mutations that occur predominantly in populations of African descent were associated with rapid disease progression.

‘Interestingly, HIV also has a mechanism to defend itself from the attacks being made on it by the APOBEC3G protein. The HIV Vif protein is able to destroy APOBEC3G so that it is unable to attack the virus,’ she said.

The study also looked at how the virus interacts with human proteins of the immune system. ‘I found that the HIV Vif protein from infected individuals in South Africa is changing itself to better destroy APOBEC3G, thereby inactivating immune defences against the virus.  These data point to mechanisms that could be exploited to develop a new class of drugs against HIV to block virus replication and slow down disease progression,’ said Reddy.

‘Within South Africa, KwaZulu-Natal is the epicentre of the HIV pandemic and continues to battle high HIV rates. Therefore finding a safe, effective and durable HIV vaccine remains a priority in the fight against HIV, it remains a great challenge,’ said Reddy. ‘Thus far, traditional vaccine approaches have focused on CTL and antibodies.’

Reddy has taken on a post-doctoral research position at UKZN’s HIV Pathogenesis Programme (HPP), where she continues her research on HIV and host restriction factors.

‘I really enjoy doing research,’ she said, ‘but I would also enjoy the opportunity of being able to lecture, mentor and teach other research students.’

When she is not doing research, she bakes and enjoys doing crafts and anything that allows her to be creative.

She said her parents and husband were ecstatic about her achievement. ‘They have been my pillars of strength and have always encouraged and supported me,’ she said.

She said her PhD supervisor, Professor Thumbi Ndung’u, had been a great supervisor and mentor. ‘He always has an open door policy and was continuously willing to share his expertise and provided outstanding guidance and encouragement throughout my PhD.’