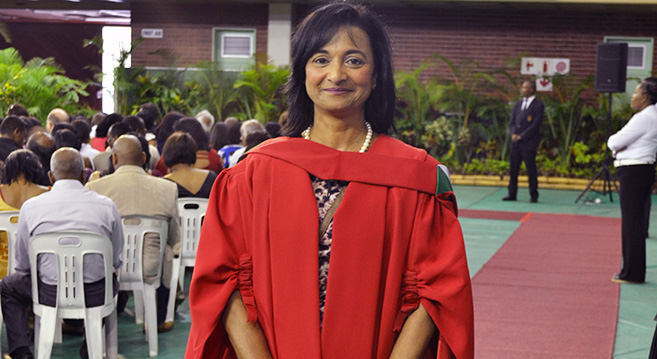 Dr Romona Govender graduated with her PhD in Family Medicine for her study on Suicide among HIV positive patients.

With suicide and HIV/AIDS being two of the greatest healthcare issues globally, especially in low- and middle-income countries where approximately 85% of suicides occur, about one million people of all ages worldwide die annually from suicide.

HIV/AIDS patients have a higher suicide risk than the general population, with an increased frequency and severity of suicidal ideation, despite the introduction of ARVs.

‘The research addresses two major public health challenges in South Africa – HIV/AIDS and suicidal behaviour,’ said Govender. ‘I feel that it makes an important, relevant and original contribution to research and intervention. Relatively little is known regarding suicidal behaviour in South Africa, especially among HIV-positive persons, and interventions designed for these patients are non-existent.  ‘Furthermore, a high level of HIV/AIDS, especially in KwaZulu-Natal where the research was undertaken, gives this research the potential to positively influence the level of care for our patients.’

There were two innovations that Govender’s study demonstrated - a suicide risk screening scale and a brief suicide prevention intervention.

Her study sought to determine the prevalence of suicidal ideation in HIV-positive persons following voluntary HIV counselling and testing (VCT); as well as to develop and validate a suicide risk screening scale (SRSS) for use in HIV-infected persons post HIV diagnosis. Implementing and evaluating a brief suicide preventive intervention (BSPI) was used in the period immediately following HIV diagnosis.

There was seen to be an increase in suicidal ideation over a six-week period following a positive HIV diagnosis, from 17.1% to 24.1%.

‘Suicidal ideation was significantly associated with seropositivity, age and gender, with the majority of affected patients falling in the younger age category,’ said Govender. ‘Young males had an 1.8 times higher risk for suicidal ideation than females. Lower education and traditional beliefs were also significantly associated with an HIV-positive status upon testing. The SRSS was implemented and, despite certain limitations, was considered to be a valuable screening tool for suicidal ideation at VCT clinics.’

In her findings, there was an important link present between hopelessness, depression and suicidal ideation, as these served as significant markers that should alert healthcare professionals to underlying suicide risks in HIV-positive patients. ‘A routine screening for suicide risk and possible suicidal behaviour should form part of comprehensive patient care at VCT clinics to assist with effective prevention and treatment.

‘Healthcare workers at VCT clinics should also be trained in suicide prevention interventions and the importance of educating vulnerable HIV-positive patients on suicide-prevention strategies.

‘Doing a PhD thesis is long, gruelling years of hard work. I did my PhD via publications which is also very stressful waiting for months for feedback, but the proverbial “cherry on top” is when your manuscript is published…..what utter joy,’ said Govender.

Mother of two, Govender is a Family Physician working for the Department of Health. She hopes to present her research findings and have input in the post-test counselling to address the psychosocial issues that affect patients, particularly suicidal thoughts following HIV counselling and testing.