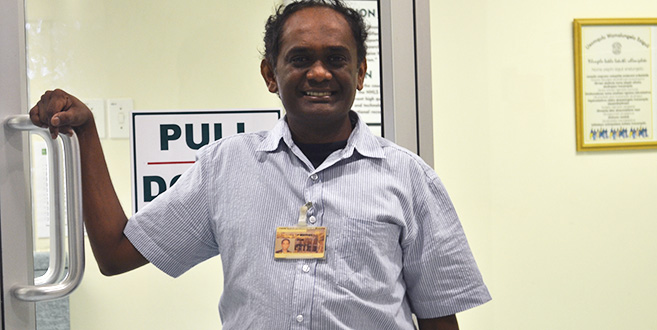 Clinical Virologist, Dr Pravi Moodley who graduated with a Master’s in Medicine (Virology) at UKZN’s College of Health Sciences, did research which showed the number of infants testing positive in KwaZulu-Natal is decreasing.

His research, titled “Reduction in Perinatal HIV Infections in KwaZulu-Natal, South Africa, in the Era of More Effective Prevention of Mother-to-Child Transmission Interventions (2004–2012)”, was published in the Journal of AIDS in July 2013.

The study describes a trend in perinatal HIV transmission associated with the implementation of rapidly changing prevention of mother-to-child transmission (PMTCT) interventions from 2004 to 2010 in KwaZulu-Natal.

Moodley said with the help of his supervisor, Professor Daya Moodley from the Women’s Health HIV Research Unit at the Nelson R Mandela School of Medicine, and Dr Raveen Parboosing, who works with him in Virology at Inkosi Albert Luthuli Central Hospital as the co-author, they looked at a total of 35 333 HIV-exposed infants of 52 weeks of age who tested PCR positive.

‘We showed a fourfold reduction in mother-to-child transmission (MTCT) from 2004 to 2010 during a rapid implementation of more complex and robust PMTCT interventions,’ Moodley said.

He said the significant reductions in MTCT in the South African PMTCT programme were encouraging for a middle-income country with the second highest antenatal HIV prevalence in the world.

‘The study did not require any funding and was fairly simple and straight-forward to do but provided high-impact information,’ he said.

He is currently a Head of Department at UKZN and NHLS Department of Virology. ‘I enjoy my work and what I do in the NHLS and at our University. The different situations which I encounter each day keep me energised.

Moodley is currently registered for a PhD in Higher Education at UKZN where he teaches Virology. ‘I am attending the PhD cohort supervision group, which is quite different and exciting for me,’ he said.’

Moodley comes from a family of mostly teachers and business and IT practitioners:  ‘My sister is a nurse in London and the other is a business analyst with Nedcor. My father is a retired education academic from the former University of Durban Westville and my mother - has always been my mother.’