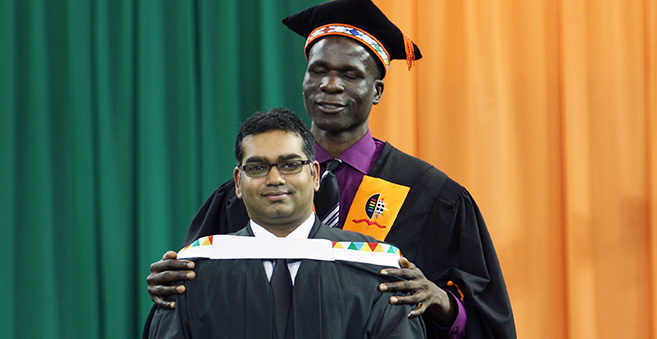 Dr Komalan Govender graduated with an MMED degree in Anaesthetics.

Dr Komalan Govender graduated with a Masters of Medicine degree from UKZN’s College of Health Sciences with a thesis entitled: “A Survey of Corticosteriod Use for the Management of Septic Shock in South Africa”.

Corticosteroids are a naturally produced class of chemicals involved in a wide array of physiological processes such as stress and immune response.

In patients with low immune systems who are unable to deal with severe infection, septic shock is a resulting medical condition, which can consequently cause multiple organ failure or death if not properly treated. By administering a low dose of corticosteroid to these patients, it can result in faster shock resolution. There is, however, controversy regarding its outcome on patient mortality.

Govender’s study, supervised by Dr Reitze Rodseth, explained that critical illness is associated with pituitary-adrenal axis dysfunction, which controls reactions to stress in the body and may cause adrenal insufficiency. This can manifest as septic shock in the patient who is poorly responsive to fluid or inotropic therapy.

Through conducting a survey during the 2011 Annual Congress of the South African Society of Anaesthesiologists (SASA), to which 65 responded, Govender aimed to examine how respondents interpreted the current literature and their use of corticosteroids in patient management.

Govender said ‘questionnaires are very labour intensive and poorly responded to if not conducted in person. Also, on-going, ethics approved, patient information databases may be a better option for acquiring large amounts of information that are amenable to simple studies. Of the 65 correspondents, all but One specialist had a background in anaesthesia or critical care.’

Govender’s study found that respondents to the surveys used corticosteroids as they were recommended to by the Surviving Sepsis Campaign guidelines, but also extended this use to numerous clinical scenarios such as sepsis (inflammation of the whole body, which is fatal) without hypotension and non-septic shock, which might actually harm the patient. ‘When making clinical decisions, more emphasis should be placed on patient-important outcomes than on surrogate outcomes,’ said Govender.

Govender, who hopes to sub-specialise in Critical Care, is currently pursuing his Masters in Medical Law degree. ‘I try to balance work, studying and family time. I am currently doing advanced tuition on the mridangam, a percussion instrument of South Indian Karnatic music, under the guidance of Guru Sivanathan Pillay.’