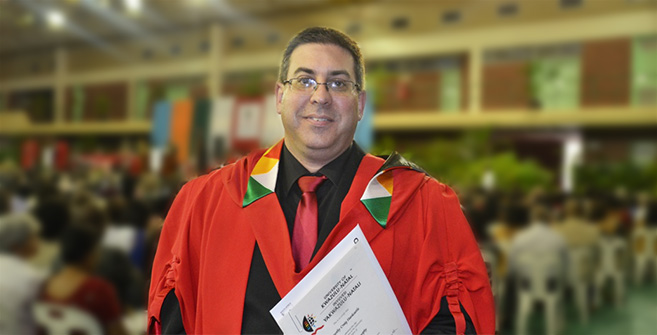 Head of the UKZN Trauma Surgery Training Unit and the Deputy Director of Albert Luthuli Trauma Service and Trauma ICU, Dr Timothy Hardcastle, has graduated with a PhD having completed his study titled: “A Trauma System for KZN – local development for local need”.

Hardcastle’s study, a PhD by published papers, examines the care of trauma and the need for a trauma system relevant to the African scenario. He examined the burden of disease for trauma (injuries), more specifically penetrating and blunt assault, domestic/industrial accidents, and motor vehicle collision related admissions, across KwaZulu-Natal.

‘Trauma is the underdog of the burden of disease. Maternal-child health, diseases of lifestyle and HIV/AIDS get most of the attention, yet trauma is neglected, despite it being right in our face – every day we hear of vehicle collisions, stabbings, shootings, and other injuries, yet very little prevention is forthcoming.’

Hardcastle’s study assessed the facility and structural aspects of the hospitals to determine if they had the equipment to treat trauma efficiently.

His last paper examined the appropriateness of using the Inkosi Albert Luthuli Central Hospital (IALCH) major trauma referral centre and whether enlargement was required. ‘This revealed that trauma is as much of a burden as HIV/AIDS, with the additional aspect that most of it is entirely preventable.’

After this, Hardcastle developed a proposal for an ideal - a defensible trauma system for KwaZulu-Natal that should be fiscally possible. ‘There were other papers included in the submission around the history of trauma care in South Africa, the criteria for trauma services and some philosophical aspects, which also drew attention to the major problem that trauma creates in the Health Department, using underfunded resources and requiring multiple transfers of patients to get them to the right level of care.

‘It was found that almost half of the patients do not go directly to the correct level of care to be able to efficiently manage their injuries. The current system is therefore not optimal and should be changed.’

Hardcastle has continued his clinical work, outreach, as well as supervision of other MMed degrees. He co-ordinates a teaching block to fourth year undergraduates in acute care, which is in the stages of refinement and ongoing improvement. Hardcastle hopes to apply for promotion to Honorary Associate Professor at some point in the future and feels that ‘it would be great to be able to implement the Trauma System, but that depends on Department of Health’.

His study was supervised by Professor DJJ Muckart.

He spends a lot of time with his family and in his free time he enjoys building scale models with his son. One of his keen interests is history - the Second World War in particular.