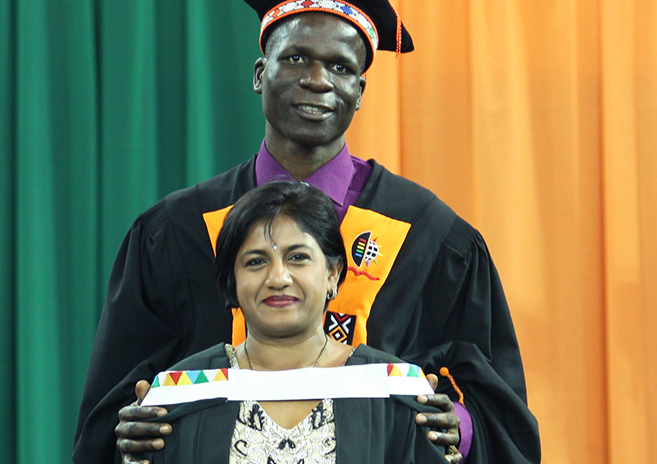 Dr Neeta Patel graduated with an MMED from UKZN.

Dr Neeta Patel from UKZN’s Department of Rheumatology has graduated with her Masters of Medicine at UKZN, her thesis titled: “Acute Presentation of Thrombocytopaenia in Systemic Lupus Erythematosus is Associated with a High Mortality in South Africa”.

Patel said the objective of this study was to determine the pattern of presentation, response to treatment, and outcome in patients with systemic lupus erythematosus (SLE) and thrombocytopaenia (TCP).

SLE is a systemic auto-immune disease that can affect any part of the body and usually occurs when the immune system attacks the body’s cells and tissues, resulting in inflammation and tissue damage.

SLE often harms the heart, joints, kidneys, liver, lungs, blood vessels and the nervous system. TCP refers to the decrease in platelets in blood. Patients with SLE and TCP were reviewed for the study and a corresponding control group of SLE patients without TCP were also seen in the Rheumatology Department in Durban, South Africa.

Their demographic data, clinical findings, laboratory findings, treatment and outcome were recorded. There were 54 patients comprising 30 Indians and 24 Black African. There was a median age of 33 years and the female to male ratio was 5.8:1.

‘We examined the association of haematologic abnormalities in the disease lupus with mortality and found an association between low platelet counts in South African Black and Indian lupus patients. A group of eight patients who initially presented with idiopathic thrombocytopaenic purpura (ITP) and subsequently developed SLE were also analysed for the study, but separately,’ said Patel.

Patel is currently a Consultant Rheumatologist and Deputy Head of Department of Rheumatology at UKZN and IALCH. She is currently working on her Doctoral thesis which will focus on HIV and arthritis. Her study was supervised by Professor Girish Mody, former Dean of the Nelson R Mandela School of Medicine.

In her spare time, she enjoys yoga, meditation and reading.