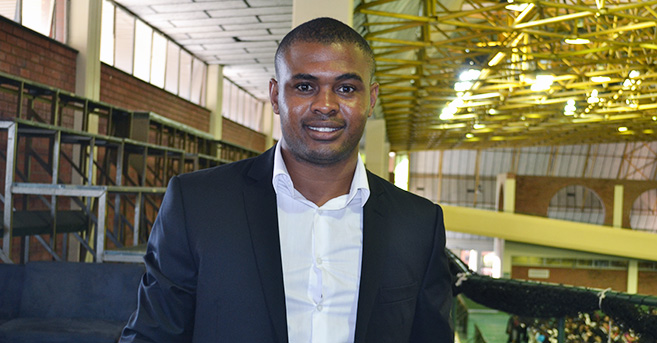 Former President of the Central SRC Nelson Mabusela graduated with an Honours in Medical Science Physiology.

Mabusela said he pursued the degree because of the socio-economic background of the majority of South Africans. ‘I wanted to contribute to the field of laboratory medicine and make sure we can find natural medicines that are freely available to all people.’

While serving as the President of UKZN’s Central SRC he says he managed to balance student leadership and his studies. ‘I did that through maximum discipline. The lifestyle and access to many resources that comes with being President was very tempting but I knew what I wanted.’ He said time management was also a crucial factor in his success.

Executive Director Student Services Dr Sibusiso Chalufu congratulated Mabusela on his degree and also commended the 37 former and current members of the SRC who graduate this year. ‘UKZN’s student leaders have always shown themselves to be a cut above the rest and have defied the stereotype associated with student leaders by excelling academically and in their leadership responsibilities,’ said Chalufu.

Mabusela has the following advice for students: ‘Being a student is one of the biggest transitions young people get exposed to. To some  this may come as freedom to do anything they want to, however it is equally important that we realise this also marks one of our first steps towards being independent.’

‘Discipline, determination, focus and perseverance is what must mark student life,’ he said.

Mabusela plans to complete his master’s degree and then continue to his PhD.

He acknowledges his family for all the support they have given him throughout his studies.  ‘I also want to acknowledge the ANC for providing NSFAS which gives us the opportunity to study.’

He also acknowledged SASCO for ‘its tireless and endless militant fight for the right to learn and free and quality education’.