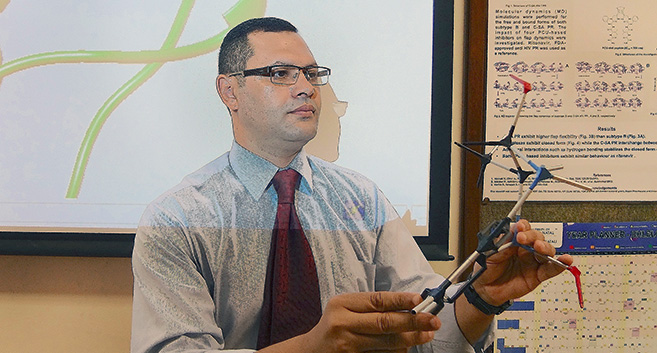 A paper by UKZN Senior Lecturer and Head of Molecular modeling and Drug Design Lab, Dr Mahmoud Soliman, has been selected to appear in the next issue of a top biomedical magazine, World Biomedical Frontiers, because of its innovation and potential for significant impact.

World Biomedical Frontiers focuses on cutting-edge biomedical research from around the globe.

‘The study is considered the very first account of the design of dual acting HIV/TB inhibitors,’ said Soliman.

In a letter to Soliman, the Editor of World Biomedical Frontiers, Michael S. Yang, said research results with significant potential to improve health or to treat or prevent disease deserved an immediate leap onto the front page.

Soliman said the hypothesis of designing of multifunctional drugs was not new. ‘However, the design strategy of dual anti-HIV/TB drugs is completely novel and our study is considered the very first account in this direction.’

Soliman is currently working with collaborators in the United States and India to optimise the design of these potential inhibitors and the synthesis and biological testing of these designed leads.  Pharmaceutical companies have shown keen interest in his study.  ‘The companies want to be involved in the study; however, this is still in the discussion phase,’ said Soliman.

Soliman is the Leader and Principle Investigator of the Molecular Modelling and Drug design research lab at UKZN’s School of Health Sciences.

‘The lab comprises a vibrant group of postgraduate students and 15 postdocs. My research lab focuses on the study of biological systems, drug-receptor interactions and the design of novel drug candidates and their mechanism of action,’ said Soliman.

Soliman graduated from a pharmacy school at Zagazig University in Egypt, and then completed his Mphil and PhD at the University of Bath in England.  He joined the School of Health Sciences in 2011 as a Senior Lecturer of pharmaceutical chemistry.

‘My passion to teaching and research is always growing. My love for Africa and African students is the engine that gives me the power to achieve and up-skill our deserving and hardworking students. Without my students, I wouldn’t have been able to achieve any of this.’