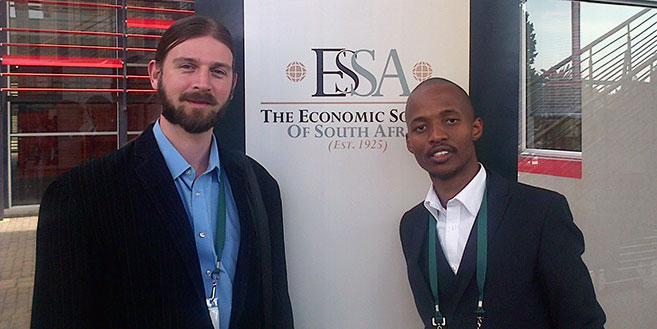 Maritime research student Mr Sanele Gumede and Graduate School of Business and Leadership's Dr Mihalis Chasomeris presented their study on maritime port pricing in South Africa at the recent Biennial Conference of the Economic Society of South Africa held at the University of the Free State.

The paper titled, “Assessing Stakeholders’ Perspectives on Maritime Port Pricing in South Africa”, analysed the annual Transnet National Ports Authority (TNPA) tariff application, the stakeholders' submissions, as well as the Ports Regulator's record of decision for the 2010, 2011 and 2012 tariff years.

‘The paper recommends that South Africa develops a port doctrine that would be consistent with the country’s vision and policies. The presentation was well attended and well received. It also generated several questions from the audience,’ said Chasomeris.

The content analysis of the paper documented several issues which included stakeholders’ criticism of the TNPA for abusing its monopoly power, hindering global competitiveness, charging price increases higher than inflation, failing to apply cost based pricing principles, the absence of a justifiable pricing methodology, low productivity and inefficiency, and inconsistent and unreasonable pricing of products.

Gumede said attending the conference was enriching as it afforded him an opportunity to network with economists from South Africa and abroad.

‘Presenting this paper gave me great ideas to improve my future research. I also learnt a lot from the papers that were presented by other authors and in other sessions. I [would] strongly encourage my fellow young researchers and research students to join the Economics Society of South Africa,’ said Gumede.