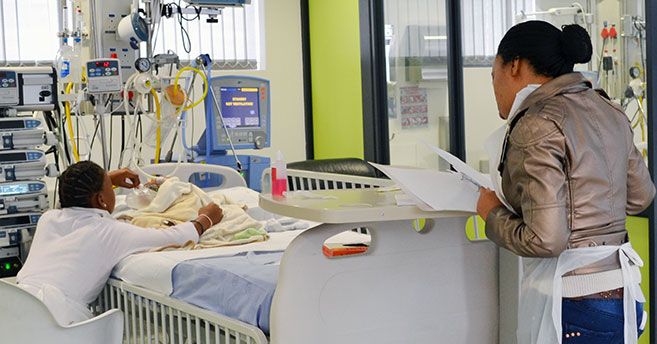 A doctor looks at patient files at Paediatrics Ward at a Durban hospital.

A study by researchers at UKZN’s Centre for Rural Health has found that babies born to HIV-positive teenage mothers are more likely to be infected with HIV than babies born to women older than 20.

This is because despite attending antenatal care facilities, teenagers do not seem to enjoy the same access to antiretroviral (ARV) treatment for prevention of mother-to-child transmission of HIV as older women.

The study entitled, ‘HIV-Infected Adolescent Mothers and Their Infants: Low Coverage of HIV Services and High Risk of HIV Transmission in KwaZulu-Natal, South Africa’, looked at the rates of mother-to-child transmission of HIV (MTCT) amongst adolescents, and compared characteristics of adolescent mothers and adult mothers, including HIV prevalence and MTCT rates.

Just over 19 000 mothers between the ages of 12 and 39 were interviewed. Researchers also examined patterns of health service utilisation during the antenatal and early postnatal period, HIV prevalence and MTCT amongst adolescent and adult mothers with infants aged 16 weeks attending immunisation clinics in six districts of KwaZulu-Natal between May 2008 and April 2009.

Researchers found that pregnant girls aged 12 to 19 were tested for HIV much later in their pregnancy than adult women. This meant they were only able to access treatment later in their pregnancy and were thus less likely to have received a full regimen of antiretroviral therapy (ART) prophylaxis. The study found that ‘significantly fewer adolescent’ mothers received the recommended ARV treatment for the prevention of mother-to-child transmission of HIV.

The survey found that most mothers had attended antenatal care four or more times during their pregnancy (80.3%), and 98.2% reported having had an HIV test.

However, the MTCT rate at four to eight weeks of age was significantly higher amongst infants of adolescent mothers compared to adult mothers.  Despite high levels of antenatal clinic attendance among pregnant adolescents in KwaZulu-Natal, the study indicates that the MTCT risk is higher among infants of HIV-infected adolescent mothers compared to adult mothers. Thus researchers suggest that access to adolescent-friendly family planning and PMTCT services be prioritised for this vulnerable group.