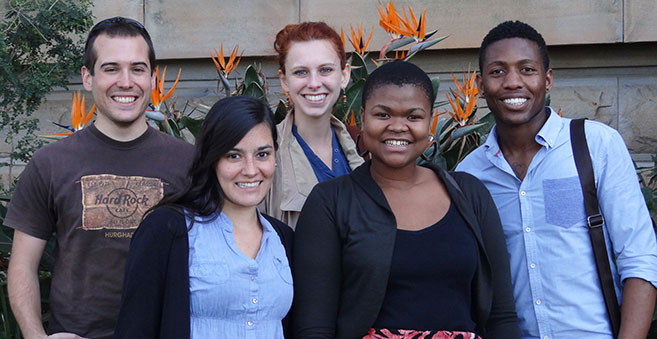 Three postgraduate German students from the University of Erlangen-Nuremberg were officially welcomed by the School of Built Environment and Development (BEDS) recently.

‘We are always looking for collaborations with respectable global institutions like the exchange programme,’ said Mvuselelo Ngcoya, Academic Co-ordinator for Development Studies at BEDS.

The students will be part of the UKZN student community for the next six months. ‘It’s very exciting to be in South Africa and at UKZN and one now gets a new impression of Africa. The campus is beautiful although we’re still finding our way around but everyone has been helpful,’ said Loewenstein.

The exchange programme will also see three UKZN postgraduate students attending the Universität Erlangen-Nürnberg in Germany from 31 August to 28 February. The students – Mnqobi Njoko, Ayanda Tshabalala and Rejoice Mabena – are part of an exchange programme between UKZN and Erlangen University in relation to Masters in Development Studies.

‘In addition to the academic opportunities, it will be culturally informative. They might find the European winter challenging, but that’s part of the deal!’ said Ngcoya.