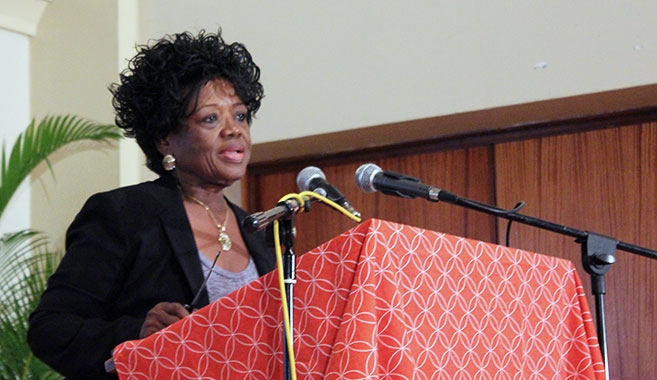 ‘African women are not problems to be solved. Like women everywhere, African women have problems. More important, they have provided solutions to these problems.’

This was the view of Professor Obioma Nnaemeka of Indiana University in Indianapolis who delivered a Public Lecture entitled, “African Feminism, Womanism and Nego-feminism: Interconnections and Contrasts” at the Howard College Theatre recently.

Hosted by the College of Humanities and the School of Applied Human Sciences, the Lecture aimed to engage the concept of African feminism and the two main forms it takes on the African continent.

She is also President of the Association of African Women Scholars and the President/CEO of the Jessie Obidiegwu Education Fund. Prior to coming to Indiana University, Nnaemeka taught at the University of Nigeria (Nsukka) and the College of Wooster (Wooster, Ohio).

Addressing the audience Nnaemeka said: ‘The issue of African feminism is of great importance to African women, not only with regards to their identities, but also as it relates to the issues that affect them and their role in the feminist movement. The assumption, however, that there is one, simple African feminism, is problematic and necessitates a precise definition, but African feminism is not a clear-cut concept that can be precisely defined and delineated.’

‘This problem of definition does not deny the existence of African feminism, but acknowledges the complexities denoted by being an African and a feminist at once.’

She pointed out that feminism is essentially two things. Firstly, it is a theoretical paradigm in social theory that seeks to advocate and enhance women’s emancipation in a predominantly patriarchal world. It is also a movement that mobilises for women’s emancipation and equality with regards to gender. Hence, feminism encompasses many varied activities and contexts.

Nnaemeka suggested that feminism in some forms also does not acknowledge the agency and potential of African women. ‘The arrogance that declares African women “problems” objectifies us and undercuts the agency necessary for forging true global sisterhood. African women are not problems to be solved. Like women everywhere, African women have problems. More important, they have provided solutions to these problems. We are the only ones who can set our priorities and agenda. Anyone who wishes to participate in our struggles must do so in the context of our agenda.’

She argued that African intellectual feminism is viewed as being somewhat elitist and pro-Western with African intellectual feminists being accused of a paternalistic attitude, reminiscent of Western feminism, towards African women. Popular feminism, on the other hand, is rooted in the lived experiences and cultural beliefs of African women, however, there are instances where it fails to mobilise against cultural practices that can be oppressive.

Nnaemeka is a commentator/cultural critic for the French Service of the International Service of Radio Netherlands in Helversum (Netherlands), a Nominator for the Civitella Ranieri Foundation (Italy) and the Carnegie Corporation of New York, a Board member of Global Women’s Leadership Center at the Leavey School of Business, and a member of the National Advisory Board of the Association of American Colleges and Universities (AAC&U) for the Liberal Education and Global Citizenship Project.

‘African intellectual feminists must listen to the women they try to advise and talk about, because they do not experience the women’s realities first-hand. Ultimately, solutions or any agenda must come from those within the specific context. These two feminisms should align under the united banner of African feminism, for they have much to learn from each other.’