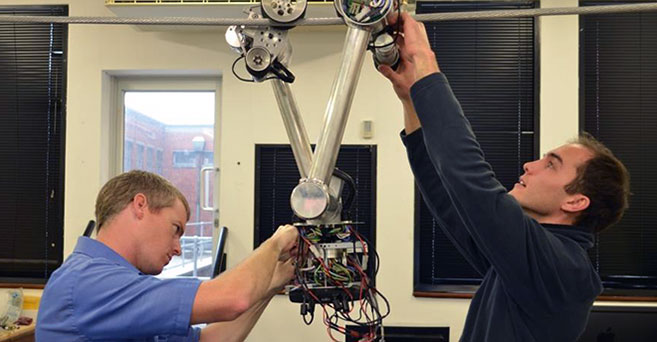 Mr Trevor Lorimer (left) and Mr Timothy Rowell with the robott they developed.

UKZN Robot Research to be Showcased in New Zealand

UKZN research which helped develop a robot to assist in the maintenance and repair of high voltage electricity transmission lines is to be showcased in New Zealand this year.

The School of Engineering’s Mr Trevor Lorimer and Mr Timothy Rowell, who both completed their MSc degrees in the complex field of mechatronics last year under the expert supervision of Professor Edward Boje, created a robot that moves on high voltage transmission lines. The robot is capable of sending video images of the line from four cameras to a station on the ground where the cables can be analysed for faults or degradation.

The Symposia provides an exciting international opportunity for this innovative research to be showcased. ‘Attending such events is an ideal way to position one’s self against the international standards of the field,’ said Lorimer. ‘Preparing for such an opportunity requires the utmost dedication and hard work - it is one not to be missed.’

Themed: "Best Practice in Transmission and Distribution in a Changing Environment", part of the Symposia’s proceedings involve various demonstration days being set aside which will see Lorimer and Rowell in action as one of three demonstrations showcasing new technology in remote inspection.

After performing an exhaustive literary survey, the robot developed by the two scientists has been identified as possibly one of only two such in existence capable of climbing jumper cables.

Adding to the ground-breaking nature of the project the robot is believed to be the lightest one of its kind in the world, weighing 20 kg, very different from others which weigh up to 100kg. ‘This gives us a big advantage when we need to deploy, because we do not need heavy equipment such as helicopters to lift it onto the line. Furthermore, during traversal of a power line, it can reach a speed of about 1 m/s (3.6 km/h),’ said Rowell.

Their MSc projects were partially funded under Eskom’s Tertiary Education Support Programme (TESP). Following the success of their MSc research, it was proposed by Boje that further work with regard to the project be undertaken at UKZN which is now contracted to develop the second prototype robot with Lorimer and Rowell spearheading the project.

The technologically innovative contribution to power line robotics of this research is undeniable and will serve to establish both UKZN and South Africa as leaders in terms of robotics research and development internationally, and possibly also contribute to growing the field in South Africa.