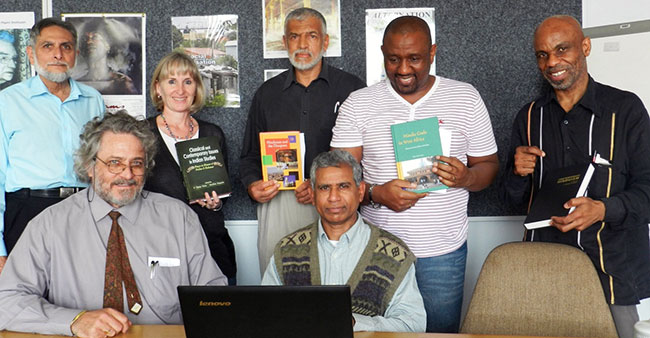 Three New Books from the Pen of Professor Kumar

Trained in Classical Indology, focused on textual studies, Indian born Kumar arrived in South Africa after his studies in both India and the US in the early 1990s. He was struck by the dissimilarities that exist in the religious practices of Hindus in India and South Africa. The differences, he soon realised were cultural and not text-based.

According to the Dean and Head of the School, Professor Johannes Smit, one of the prime questions that has informed Kumar’s research since then, is the focus on “lived religions” vis-à-vis the past-historical and text-based study of religions. ‘The question is how religions are experienced and lived in specific contemporary communities and cultures and not in terms of a hypothetical past. His research along this track resulted in Hinduism and the Diaspora,’ said Smit.

Kumar’s second edited book, Contemporary Hinduism, was sparked off by his writing of a critical review of 10 of the most prominent introductory books on Hinduism a few years ago. In his review he pointed out that the books represent Hinduism idealistically, and based on the interpretations of texts.

They did not engage Hinduism as actually lived religion. Shiva for instance is celebrated in lived religion, very differently from text and temple-based traditions. This attracted a number of international scholars who then collaborated with him on the research into the variety of ways in which Hinduism is practiced in different parts of the world, and which resulted in this edited book. Contributions addressed contexts ranging from the US, to Trinidad, the Caribbean, the Scandinavian countries, and a number of areas in India.

Never losing his foothold in Classical Indology, his third edited book is the result of collaborative research by a group of international scholars that engages both classical text-based studies, and manifestations of contemporary Hinduism.

Presented as a Festschrift to Professor TS Rukmani, Emeritus Professor of Concordia University, and formerly employed at the University of Durban-Westville, one of the main focuses in the book is yoga. Other focuses include the Vedanta tradition, continuity and compatibility, narrative and philosophical discourse, intellectuals and ascetics, and issues in contemporary Hinduism such as environment, non-violence, gender, faith, and syncretism.

In his review of the books and Kumar’s scholarly contributions to South Indian and Diaspora Hinduism, Smit said that Kumar was instrumental in developing and updating the study of Hinduism in these areas in path-breaking ways.

‘The body of scholarship he produced has made substantial theoretical and conceptual contributions to the study of not only Hinduism but also Religion Studies more generally speaking.

‘He has foregrounded the contemporary social and cultural study of religion and how the phenomenon of religion could be understood. No-one can engage the study of Religion internationally without taking cognisance of the innovative and pioneering research of Professor Kumar,’ said Smit.