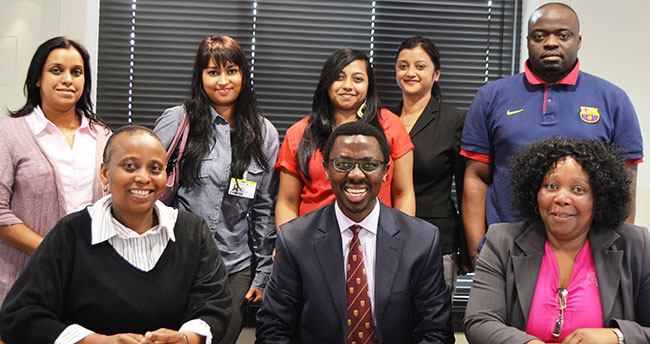 UCT’s Professor Bongani Mayosi with UKZN staff and students at the lecture on cohorts in science.

Transforming the science cohort in South Africa, was the title of a Public Lecture at UKZN by the Head of the Department of Medicine at Groote Schuur Hospital and the University of Cape Town, Professor Bongani Mayosi.

The Lecture formed part of a series of workshops hosted by Women in Leadership and Leverage (WILL).

Referring to a series of articles which appeared in Nature during International Women’s Day focused on the position of women in science, Mayosi said: ‘Clearly, the issues WILL is dealing with are not just South African issues, they are global issues.’

‘The summary of this series in Nature is that science remains institutionally sexist. There is progress, but it is clear that there are still major disparities related to pay, promotion and grants,’ said Mayosi. ‘There are quite a few barriers that make women leave science.’

Mayosi, a UKZN alumnus, examined the current state of the science cohort in South Africa and mechanisms in place to address shortages.

Using statistics compiled by the Department of Science and Technology, he highlighted the ages of South Africans who are publishing in all fields of science. In 1990, six percent were under the age of 30. ‘This dropped to one percent by 2002. Over a 12-year period, the proportion of younger producers of knowledge is in fact decreasing,’ he explained.

‘The pipeline isn’t being replenished – there aren’t younger people coming in. You’ve got a group that is frozen and getting smaller.’

A former Nuffield Oxford Medical Fellow in cardiovascular medicine at the University of Oxford, Mayosi explained that South Africa had a small number of producers of high quality knowledge. ‘There is no doubt that the diminishing size of the science cohort as well as the failure to introduce new schemes and people are having a detrimental effect on productivity.’

This problem was brought to the attention of the then Minister of Science and Technology, Mrs Naledi Pandor, in 2006. Pandor asked the Academy of Science for South Africa (ASSAf) to conduct a study on this issue.

‘The first issue was that of public engagement with research. The South African public and our politicians seem to be very suspicious of research, as if it is a bad thing. We must dispel that myth – we must educate the public and journalists that research is good.’

He added facilities, people, funding and major grants for projects were all crucial in addressing this matter.

Key to transforming the science cohort was the national health scholars programme launched earlier this year.

‘The strategic approach with this programme is that we are targeting young, entry level academics in academic departments, who have just finished their professional qualifications and are ready to launch their careers but have no time to build them because of clinical and other duties.’

Mayosi said: ‘This is the first intervention that gives us the ability to shift and increase numbers and to begin to transform the science cohort of South Africa. It’s a hugely competitive process simply because we are targeting everyone in the health system. This ranges from medical engineers to physiotherapists.’

He encouraged WILL to field candidates for the following funding opportunities:

His research interests include genetics of cardiovascular traits, treatment of tuberculous pericarditis, prevention of rheumatic fever and epidemiology of heart disease in Africa.

In November 2009, President Jacob Zuma awarded him South Africa’s highest honour, the Order of Mapungubwe in Silver, for excellent contributions to medical science.