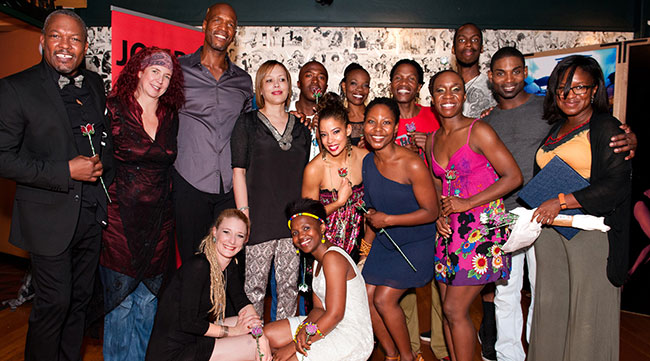 JOMBA! Ends on a High

Chicago-based dance company Deeply Rooted Dance Theatre, collaborating with Durban’s FLATFOOT DANCE COMPANY, stunned the audience with their presentation: “The Dance We Dance” on the closing night of the annual JOMBA! Festival.

The dance was a confluence of their 21-year history of signature award-winning works.

Having hosted nine local and international dance companies from as far afield as Portugal, the United States, France, and Holland, as well as various workshops, seminars and community engagements, the College of Humanities annual JOMBA! Festival closed on a high.

Ms Lliane Loots, Artistic Director of JOMBA! and Dance Lecturer in the Drama and Performance Studies Programme at UKZN, said: ‘Deeply Rooted came to UKZN and JOMBA! as a direct result of funding supplied by the US Consulate’s Arts Envoy Programme, and the eThekwini Metro’s twin city agreement between the sister cities of Chicago and Durban.’

Deputy Vice-Chancellor and Head of the College of Humanities Professor Cheryl Potgieter spoke warmly at the after party saying: ‘This is an incredible celebratory moment in JOMBA!’s and the College of Humanities’ history. UKZN is part of nurturing relationships between artists, community arts activist and academics who support and nurture critical arts.’ JOMBA! is co-ordinated by the Centre for Creative Arts. Professor Potgieter said she was proud of what the festival has accomplished.

Also present at the event was the United States Consulate’s Public Affairs Officer, Ms Najlaa Adbus-Samad), who spoke about the need to foster relationships - whether academic, funding or community based - which support the growth of arts, and by extension, the growth of democracy.

Loots, who was thanked for her work in continuing to keep the vision of JOMBA! alive, said JOMBA! attracted record crowds – with four of the performances playing to capacity houses!