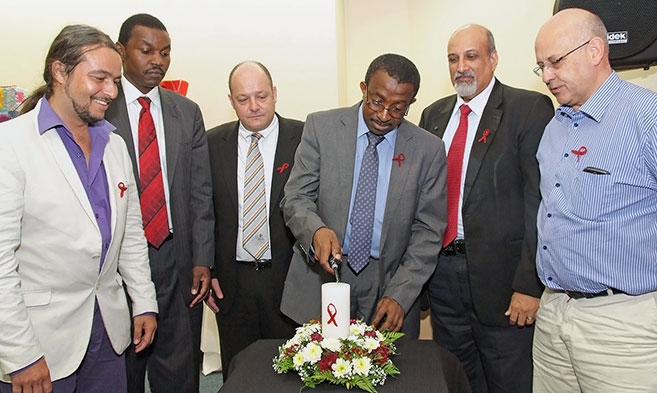 Panelists light a candle in remembrance.

Putting the "I" into HIV

UKZN’s College of Health Sciences together with its partners CAPRISA, K-RITH, Health Systems Trust, HEARD and the National Health Laboratory Services hosted a panel discussion on the theme: “Putting the ‘I’ into HIV– New Approaches in Developing Person-Centred Interventions to Fight the Epidemic”.

Ahead of World AIDS Day 2013, leading HIV/AIDS researchers in Durban have urged society to focus on insights, innovation and integrity in the journey into an HIV-free future – and to put people at the centre of health services.

Deputy Vice-Chancellor and College Head, Professor Rob Slotow, introduced the panel of speakers as individuals who had led significant contributions to HIV science which had been translated into national and international health policy.  This new knowledge had enabled health leadership, particularly in KwaZulu-Natal, to mobilise the roll-back of HIV.

Focusing on sexual transmission of HIV as the key driver of infection, Professor Salim Abdool Karim, Head of CAPRISA and President of the Medical Research Council of South Africa, said over the last three years, there had been an explosion of research evidence compiled on HIV prevention using antiretroviral drugs such as prophylaxis. The evidence has changed the global approach to HIV prevention methods and offered real hope for reducing levels of incidence.’

Professor Alan Whiteside of the Health Economics and AIDS Research Division (HEARD) emphasised the financial burden of not curbing new HIV infections. ‘Along with the tragic spread of illness and loss, the financial challenge of treating the 12.3 percent of South Africa’s population who are HIV-positive is considerable,’ he said.

‘The cost of drug supplies and staff will compromise the health budget in some other area. ARVs have preventative effects, but we cannot treat our way out of AIDS.  On our current health funding, we can’t afford to follow the established guidelines for treatment. Overseas donor aid is diminishing; we can’t increase our domestic resources, so we must spend them more efficiently.’

Responding to these points, audience members called for the establishment of a local drug industry that could produce medicines for a broad range of infectious and non-communicable illnesses, questioned the standards of primary health care service delivery, and raised the issue of more radical programmes for behaviour change prevention messaging.

Abdool Karim confirmed that much could be reduced and saved through cost-effective models of care that should not compromise clinical outcomes.  ‘Right now, we are not managing our resources well and corruption eats into our supply chains.  South Africa should be making its own ARV active ingredients – this would be a rate-limiting element in the cost of drug manufacturing and supply, cut out the importation costs in foreign exchange, and create local jobs.  Necessity drives innovation, and because of the sheer need to address HIV-related problems, we’re now doing things differently for a number of diseases such as TB, asthma, hypertension and diabetes – we have home-based and point-of-care testing, as well as task-shifting to optimise our health worker capacity.’

On behaviour change, Abdool Karim noted that smoking has been successfully addressed by structural driver adjustments such as raising the cost of cigarettes and prohibiting smoking in public areas, along with public education on the dangers of smoking. More studies are needed on behaviour change solutions for HIV prevention that focus on structural drivers – one example being a cash incentive for staying HIV-negative.

The panelists and audience agreed that gender violence and discrimination, particularly in relation to the vulnerability of young women to HIV infection, had to be confronted in concrete ways.

Whiteside argued that HIV has become over-medicalised: ‘We shouldn’t need all these drugs, because people shouldn’t be getting infected. We need a social compact, so that people’s right to treatment, care and support are balanced by their responsibility to respect each other, practise safe sex and adhere to treatment regimes.’

Speaking on the prospects of a viable HIV vaccine, Professor Thumbi Ndung’u of the KwaZulu-Natal Research Institute for TB and HIV (K-RITH) said that although research had not yet yielded a vaccine solution eligible for licensing, there was evidence that a vaccine was possible. Animal studies were working on vectors that could produce immune system responses with 50 percent protection rates. Antibodies from HIV-positive patients were being tested to block the virus in uninfected subjects while computational biologists were creating sequence diversity to corner off the virus and its pathways, providing no escape from the body’s immune response.

‘An HIV vaccine is an enormous challenge,’ said Ndung’u. ‘The virus is a formidable enemy: even in one infected person, it swarms around the body, replicating in the key structures of the immune system, and there is no known natural cure.’

Asked whether it was feasible to pursue an HIV vaccine in the context of funding shortages, Ndung’u argued that we first had to invest in a deeper understanding of the human immune system. ‘In 1935, no-one believed that a polio vaccine would work, but scientists persisted and eventually triumphed.  We are doomed as a society if we don’t keep trying to know more.’

HIV genetic analysis and molecular evolution was presented by Professor Tulio de Oliveira, a researcher in genomics at the Wellcome Trust’s Africa Centre for Health and Population Studies.  Using HIV genetic data and bioinformatics to examine the epidemiological patterns of HIV transmission, more can be understood about the direction of infection, which helps to guide treatment interventions.

‘We can also study drug resistance more closely with these techniques and characterise how the disease is spreading,’ said de Oliveira. ‘This work will be of significant benefit for South Africa’s generalised epidemic as rural communities are highly vulnerable.  Rather than drive more stigma into the disease by terrifying people with harsh prevention messages, we should find out more about the linkages between and characteristics of transmission agents and targets.  For instance, who is infecting young women?’

Dr Themba Moeti, CEO of Health Systems Trust, reminded the gathering that the real benefits of new discoveries accrue to patients and communities at the end of a long process of translating the findings into policy and practice.  ‘Access to the interventions and services is only possible and impactful once they are taken to scale,’ said Moete. ‘So beyond the essential biomedical tools and political will needed to advance this, we need the commitment and involvement of citizens themselves.

‘While the choices made by leadership have changed the path of the epidemic, people must be placed at the centre of change, Human behaviour will determine long-term prevention and the eventual elimination of HIV as a major public health challenge,’ said Moeti. ‘There are many forms and aspects of the epidemic across the different types of individuals who are part of it, so social and behavioural research is crucial now.’

Moeti added that with the co-epidemic of HIV and TB still ranking as the highest cause of death, communities needed to prioritise massive investment in health systems strengthening.  People are living longer with HIV and will succumb to non-communicable illnesses, and we have to ensure that all these diseases can be managed efficiently.’

Closing the seminar, Slotow noted there had been clear recognition of the role of young, emerging researchers leading innovative responses to HIV and AIDS.  He said the discussion had compellingly drawn the roles of science and society together:  It is people – with our insights, activism, behaviour and responses – that will take all the science forward to create an AIDS-free future.’