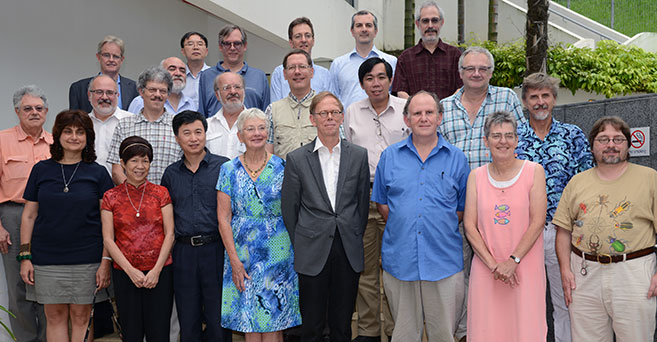 Members of the International Commission on Zoological Nomenclature and Associates at a meeting of the Commission in Singapore, with UKZN’s Professor Emeritus Denis Brothers on the far left.

With 21 of the 26 members present, it was the first time such a large contingent of the commission had met together in one place. Their discussions on a host of important matters will mark the way forward for the ICZN.

Professor Denis Brothers, Professor Emeritus of Entomology in the School of Life Sciences on UKZN’s Pietermaritzburg campus, attended the meeting. He has been a Commissioner since 1996 and is the immediate Past President of the Commission. He is the second Commissioner from Africa, the first being Professor Ernest Warren, a Professor of Zoology of the Natal University College in Pietermaritzburg in the 1920s.

The ICZN, established in 1895, is the international body responsible for the management of naming animals, both living and extinct, by just two names which uniquely and succinctly distinguish species from one another. With only 1.5 million living animal species named out of an estimated eight-10 million living species, the work that the ICZN has undertaken has only grown in importance since the binomial system was introduced in 1 758 to various human enterprises.

The Commissioners manage naming by taking into account priority, prevailing usage, and other factors to help maintain nomenclatural stability to avoid confusion. This is achieved in part through publication of the International Code of Zoological Nomenclature, now in its 4th edition, which is authored by the ICZN. Additionally, the ICZN manages and resolves disagreements pertaining to zoological nomenclature, some which have serious implications for business, commerce, and conservation.

Votes and decisions taken by the Commission are final and binding for all biologists.

The ICZN is administered and funded by the International Trust for Zoological Nomenclature (ITZN), a UK charity established over 60 years ago which keeps the Commission’s secretariat and operations functional and oversees the publication of the Bulletin of Zoological Nomenclature, which publishes cases, comments, and the final results of voting. In recent years, ITZN funding has been declining while the ICZN’s roles and challenges have increased as biodiversity science has gained importance due to an expanded biological community, advanced research and publishing technologies and the influence of the internet.

By late 2013, the ITZN will have effectively spent its last dollar, and no longer be able to support the ICZN secretariat. This dilemma has raised questions of how nomenclatural problems would be addressed without the authoritative presence of the ICZN.

Fortunately, two temporary solutions have presented themselves to the ICZN. First, the National University of Singapore has agreed to host the co-ordinating part of the secretariat for the next three years, significant because the ICZN offices have always been in the United States or United Kingdom and its move into Asia is an affirmation that ICZN is an international organisation. Second, the Natural History Museum in London has agreed for the next few years to administer and publish the Bulletin of Zoological Nomenclature, the main organ for disseminating ICZN cases.

Discussions at the meeting included how a distributed ICZN secretariat could function and how current and future roles could be streamlined and made more efficient as well as less costly. This involved developing a new business plan with the National University of Singapore as well as other stakeholders using endowments as the basis for financial autonomy, revamping the operations and editorial structure of the Bulletin of Zoological Nomenclature and finalising discussions for its 5th edition.

It was also necessary to affirm that the online version of the Official Register of Zoological Nomenclature, ZooBank, is core business and strategising on how to make electronic publication of works and names more efficient. The implementation of a manual on The List of Available Names was discussed, which will help stabilise the nomenclature of groups of animals. The Commission also investigated how to handle “taxonomic vandals”; and how to involve the taxonomic community more in electing scientists to the Commission to expand its scope and expertise.

This landmark meeting sets the stage for how the ICZN will operate for many years to come.