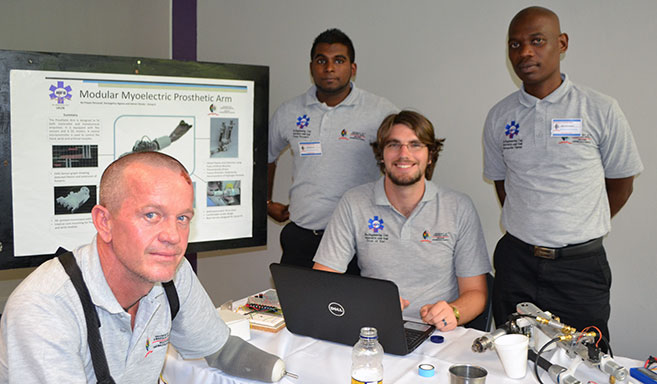 A prosthetic arm, a solar-powered car, an automated beer brewing machine and an aerospace propulsion test-stand were among exhibits on display at this year’s Mechanical Engineering Open Day, held at the School of Engineering building on the Howard College campus.

The day provided an opportunity for final-year Mechanical Engineering students to exhibit the results achieved during their 2013 projects.

The public, the media and members of the University fraternity attended with engineering students on hand to showcase their projects and provide further information on them.

The event culminated in a prize-giving ceremony that rewarded excellence across five categories.

Mr Akshay Maharaj, Mr Cameron Pittman and Mr David Black (Group 11) were the runners-up in this category with their automated CMYK painting machine. The machine mixes primary colours into a single colour, selected through a software interface.

The prize for best industrial potential went to Group 18 for their eco-friendly, solar heated collapsible hut. Mr Jared Mackrory, Mr Shevendra Mathura, Mr Sean Richards and Ms Teagan Butterworth built a scale model of a hut which can be easily dismantled, transported and assembled. The hut also made use of a solar panel for energy, was made of eco-friendly materials and insulated against rain and cold. This hut would be of great use to researchers who spend lengthy periods in harsh weather conditions.

Lastly, final-year students were allowed to determine the winner of the Peer Prize, sponsored by Pitchline Engineering and awarded to the hardest working group. The prize went to Group 19 and their automated beer brewing machine.

The research, hard work and passion on display were a clear indication of how UKZN continues to inspire greatness among its students.