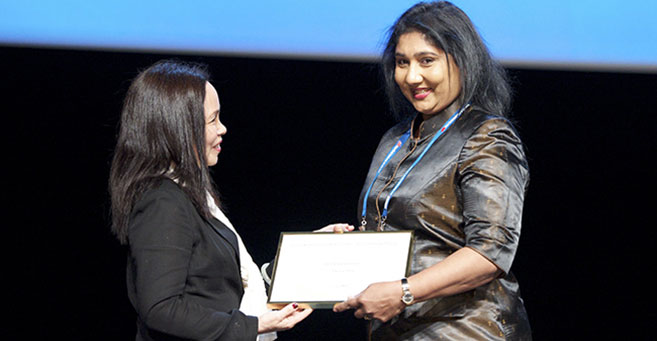 Dr Kogieleum Naidoo of UKZN’s Centre for the AIDS Programme of Research in South Africa (CAPRISA), has been awarded the Union 2013 Scientific prize in recognition of the impact of her work in international tuberculosis (TB) and HIV care.

The award was made by the International Union Against Tuberculosis and Lung Disease in Paris.

Naidoo is Head of the Treatment Research Programme at CAPRISA and a lead investigator in CAPRISA studies aimed at optimising treatment strategies for patients infected with both TB and HIV. Her most significant scientific contribution is the CAPRISA SAPiT trial, which served as the basis for the 2009 World Health Organization (WHO) Rapid Advice on TB-HIV treatment integration.

These findings were subsequently incorporated into the South African guidelines, the WHO international guidelines, and the US government Department of Health and Human Services guidelines for treatment of TB-HIV co-infected individuals.

Her research on immune reconstitution inflammatory syndrome and rifampicin-efavirenz drug interactions has been influential in defining treatment strategies for these two common complications of integrating TB-HIV treatment.

Naidoo is the Principle Investigator of the CAPRISA 005 study on TB recurrence in TB-HIV co-infected patients successfully treated for TB. She leads a large team of researchers conducting this study, and has established collaborations and is working with immunologists, TB basic scientists, molecular epidemiologists; infectious disease physicians and public health practitioners from a range of South African and international bodies with the goal of improving the understanding of TB immunology in the context of HIV infection.

Naidoo said: ‘I feel deeply humbled and honoured to be a recipient of this award, which I received on behalf of the amazing CAPRISA team.’

Every year, the Union - founded in 1920 - presents three awards during the World Conference to recognise contributions to TB, asthma, HIV, child lung health, tobacco control and related lung conditions. It is a highly regarded international scientific institute and a federation of more than 2 000 member organisations and individuals committed to the vision: Health solutions for the poor; technical assistance; research and education.