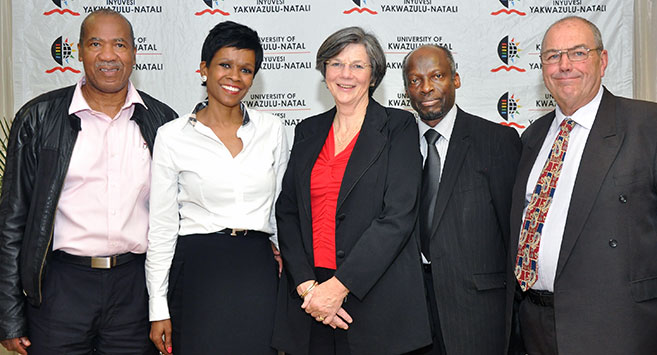 The University bid a fond farewell to three members of its Executive Management during the year-end Council dinner on the Westville campus this week.

In a talk titled: “In my Father’s Footsteps”, UKZN Vice-Chancellor and Principal, Professor Malegapuru Makgoba, said the current Executive Management had been the best he had ever worked with.

Makgoba said they were focused in the vision and mission of the University, were passionate about things that needed to be done, and were experts in their own areas.

He also spoke on the achievements of each of the trio and highlighted contributions they had made to the success of UKZN.

Makgoba said Ijumba had been the most successful DVC Research because he had worked hard, contributed his best and was a team player.  The experience that Ijumba had gained through the process of the merger would stand him in good stead as he moves on to his new position of Senior DVC at the University of Rwanda.

Recognising her especially for her organisational skills and efficiency, Makgoba said Meyerowitz was the “best Registrar” around and commended her for bringing in systems of compliance of policies and efficiency in her work which were right in line with one of UKZN’s strategic goals: Efficient and Effective Management.

Makgoba said he would remember Poole for managing to slim down a complex portfolio into its current status.  Poole had come into a difficult position and grappled successfully with the operations of the portfolio. He would also remember him for being honest about this work and voicing his concerns.

Mnganga thanked the University leadership for their contribution and recognised them for the work achieved during the year.