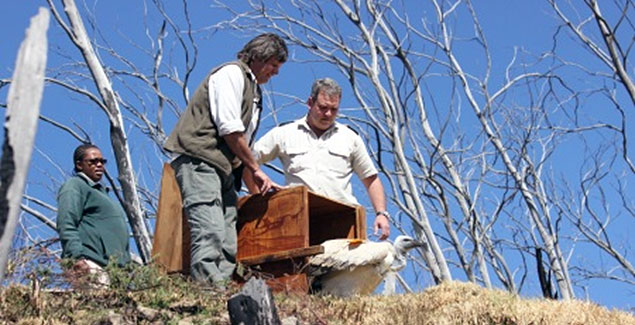 Mr Ben Hoffman and Mr Frik Lemmer release a Cape Vulture back into the wild.

An MSc student in UKZN’s School of Life Sciences, Ms Morgan Pfeiffer, has devoted the past 18 months to the study of the Cape Vulture.

The vulture is currently listed as vulnerable by the International Union for the Conservation of Nature (IUCN) but with the number of poisoning incidents and other environmental factors the raptor could soon be up-listed to endangered.

Pfeiffer, who received her BSc from Penn State University in the United States, is being supervised by Professor Colleen Downs of the School of Life Sciences on the Pietermaritzburg campus.

Pfeiffer has been involved with a host of initiatives to preserve the Cape Vulture and her MSc research focuses on examining the threats to this raptor. More specifically she investigates the interactions between the bird and people who live in areas it inhabits.

A recently reported incident in which 48 Cape Vultures were poisoned in the Kokstad area caused Ezemvelo KZN Wildlife officials and other watchers of this vulture to raise the alarm about the delicate balance of wildlife being disturbed by the threatened existence of these birds.

‘I have never named the vultures I follow, to resist the urge to personify them,’ said Pfeiffer in reaction to the incident.

‘But I still knew them. I saw where these birds went when people were not watching. I could tell you the sex of a particular bird and where it lived on the cliff. Some birds travelled far from their colonies, while others were busy parents sitting on eggs. So they didn’t have names but they still lived.’

In the incident, two birds were rehabilitated and released back into the wild through a programme run by Raptor Rescue of which Mr Ben Hoffman is CEO.

Hoffman and members of Ezemvelo KZN Wildlife - including Dr Sonja Kruger, Regional Ecologist for the West uKhahlamba area, who works with the Bearded Vulture (a critically endangered species) – also went to the Drakensburg to release a Cape Vulture which had been rehabilitated for seven months in Hoffman’s programme.

‘This vulture has been poisoned with organophosphate poisoning, which attaches itself to fat cells in the vulture’s body and is difficult to get out of the system, making the rehabilitation process a difficult and sensitive one,’ explained Hoffman.

The rehabilitated bird was tagged, measured and released back into the wild with the assistance of Pfeiffer and members of Ezemvelo KZN Wildlife.

Pfeiffer, who has a very personal relationship with the birds she is working with, hopes her work will contribute to conserving the Cape Vulture.

* The International Vulture Awareness Day, which took place on the 7th of September this year, started as Vulture Awareness days run by the Endangered Wildlife Trust’s Birds of Prey Programme in South Africa and the Hawk Conservancy Trust in England.

The two organisations then decided to collaborate and expand the initiative into an international event aimed at drawing attention to the plight of these birds and encouraging efforts to ensure their conversation.

Among a host of international organisations, several bodies in South Africa are a part of this initiative including Ezemvelo KZN Wildlife, Friends of Blouberg and the Wildlife and Environment Society of South Africa’s Nyoka Ridge Vulture Restaurant.