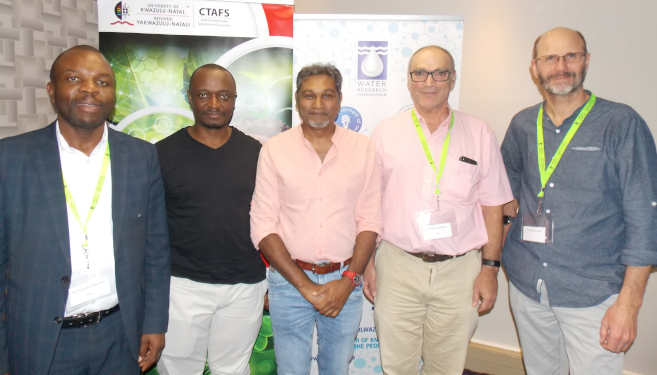 Deputy Vice-Chancellor and Head of the College of Agriculture, Engineering and Science Professor Albert Modi opened the event attended by about 50 representatives from organisations and institutions including the WRC, Global Water Partnership – Southern Africa, Umgeni Water, the Department of Agriculture, Forestry and Fisheries, the International Water Management Institute, the SA Weather Service (SAWS), Stellenbosch University, WaterNet, IHE-Delft, eThekwini Municipality, Jones and Wagener, the University of Zimbabwe, Pennsylvania State University, the Department of Water and Sanitation, and the Agricultural Research Council.

Also in attendance were UKZN staff and students from disciplines that collaborate within the Centre for Transformative Agricultural and Food Systems (CTAFS), such as Agricultural Engineering, Crop Science, Agricultural Economics, Hydrology and Environmental Science. UKZN’s Pollution Research Group was also represented.

Modi welcomed WRC CEO Mr Dhesigen Naidoo, and noted that the support of the WRC had contributed to the success of the UKZN team working within the WEF nexus. He also thanked organisations such as the ARC and SAWS for challenging UKZN to produce the standard of work expected by the WRC.

Modi thanked Honorary Professor Graham Jewitt of the IHE Delft Institute for Water Education for his insight, ideas, and continued support of UKZN, and thanked the Pro Vice-Chancellor for African Cities of the Future, Professor Rob Slotow, for his collaboration.

Modi noted that the team now working within CTAFS had trained more than 20 postgraduate students - 60% of whom are African women - through WRC projects to contribute to expanding South Africa’s expertise in the water sector since 2013. CTAFS is leading three flagship WEF nexus projects with the WRC, which Modi said would be successful and produce important knowledge thanks to the team’s experienced collaborators.

Naidoo, who developed the WRC’s focus on the WEF nexus in 2012, presented in the opening session of the workshop. He thanked UKZN for hosting the event, and congratulated the community of practice for their achievements, saying these had exceeded the WRC’s expectations.

‘The southern African region has become a hotspot of knowledge production in the WEF nexus, and UKZN has become an epicentre of that hotspot,’ said Naidoo.

‘Not only are we building the knowledge tree further, and building the human capital we want around this, but this is the repository of knowledge that is going to start advising how this goes into practice,’ said Naidoo.

The second day focused on building partnerships in the region and beyond, plans to publish a book on the WEF nexus to provide a knowledge synthesis for the work done in southern Africa, and the establishment of the Southern Africa WEF Nexus Network (SAFWEN), a regional community of practice for the WEF nexus.

‘We look forward to future meetings resulting from these synergies that the WRC will make happen for this community of practice,’ said programme chair Professor Sylvester Mpandeli.